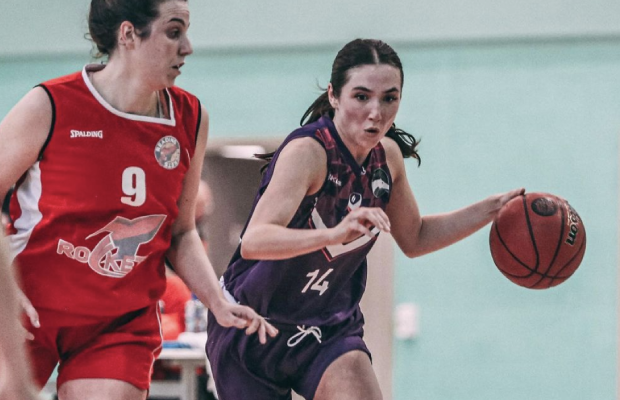 The top three seeds all advanced from the first round of the WNBL D1 playoffs, while Solent Kestrels were knocked out on their home floor.

The fourth seeds were beaten by Nottingham Trent University, who will take on league champions Ipswich next week, while CoLA Southwark Pride take on Loughborough Riders in the other semi-final.

NTU survived a late fightback from Solent to secure a 68-74 success to make it through to the last four. Schekinah Bimpa returned to action with 20 points and 10 boards with Evi Dekker adding 17 points in the win.

The home side were led by Faye Endean’s 20 points as they put together a 23-11 fourth period, though it was not enough to claw back a deficit that had been as large as 21 points.

The playoff dream comes to an end,
Good luck to @NTUWBasketball in the next round.#kestrelsfamily pic.twitter.com/gLKfxo1i3K

Ipswich were emphatic winners as they defeated Thames Valley Cavaliers 88-54 behind a 35-point outing from Harriet Welham. The top seeds used a 31-11 second period to establish control and never looked back with 10 players on the scoresheet.

Esther Little, who added 13 rebounds and three blocks to four points with Katherine Goldsby leading the Cavs with 13 points, 15 rebounds and five assists in the loss.

Meanwhile, Loughborough had to battle past Reading Rockets for a 62-53 triumph as they needed a dominant final period to progress. The third seeds outscored the visitors 24-8 in the fourth as 16-year-old guard Katie Januszewska posted 19 points and 13 rebounds with Makana Stone also netting 19 points in the win.

CoLA enjoyed a 68-45 victory at home to BA London Lions II with Emilie Black’s 20 points leading the way for the number two seeds. Molly Lavin added nine points, seven rebounds and three steals from the bench with the hosts without Isi Ozzy-Momodu.

Paula Puzule fired in another five triples in a 17-point haul for the Lions, who had recovered from an 0-8 record to make the playoffs. However, they trailed by 11 heading into the final quarter before being held to just six points in the fourth to end their hopes of an upset.