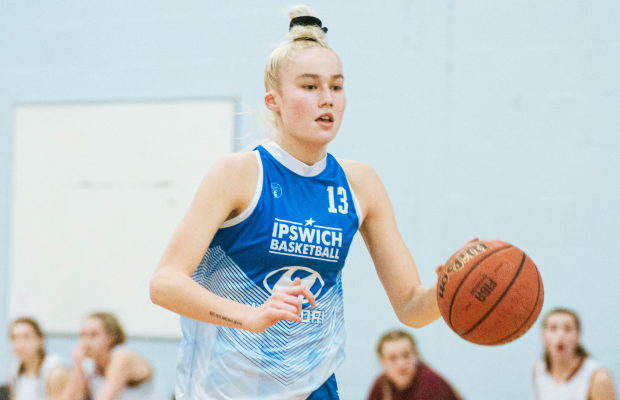 The WNBL Division 1 playoffs begin this weekend as eight teams battle it out to be the last one standing at the end of the month.

Here’s a closer look through at last eight ties:

Ipswich secured their second successive league title with a dominant victory over Loughborough in their penultimate league fixture. Nick Drane’s side then defeated Reading to head into the post-season on a six-game winning run with just two losses in their league campaign.

The Cavaliers also head into the playoffs in form as they won three on the bounce to clinch the final spot. They doubled their win tally with an important victory over Worcester Wolves followed to two wins against Cardiff Met Archers II in as many days last weekend.

Ipswich were convincing winners in the two league meetings between the two sides. Harriet Welham fired in 29 points in February’s 54-90 road success before Danielle Cazey poured in 31 in a 94-72 victory in April with Katherine Goldsby netting 26 points in defeat.

Welham and Esther Little are the standout names amongst the entire league with incredible numbers week in, week out. TVC can’t afford to sleep on the dangerous shooting of Cazey, while Cameron Taylor-Willis has been a reliable high-level performer throughout the season.

Goldsby will be key if the Cavaliers are to push the league champions with Ezekiela Lisk and Eleanor Bishop able to provide valuable scoring support, though their task on the defensive end will be just as important in trying to contain a fast-flowing offence.

CoLA are right up there amongst the form sides in the league with just one loss – against Ipswich – since March. They enjoyed an emphatic 33-point road win at Worcester on the final day with the second seed locked up as they recovered from an early 2-3 record.

There was an even bigger recovery as Barking Abbey bounced back from eight straight defeats to win six of their final 10 to end up in seventh. They went 2-0 in May to make sure of their place including a decisive 101-71 triumph over the Wolves, who would finish in ninth.

They first met back in November with Simona Henshaw’s 20 points leading CoLA to a 77-51 home victory as they raced out to a 27-17 advantage. A fast start was key to their 53-73 success on the road in April as they led 9-20 after 10 minutes with Henshaw again top scoring with 18 points.

Henshaw is heading to NCAA Division 1 next season and is a strong leader for a young CoLA side. They have a fierce interior presence with GB junior duo Isi Ozzy-Momodu and Lavin constant threats on the glass as well as highly-efficient scorers.

Leia Edwards has produced some big performances for BA this season, while Paula Puzule is hitting form at the right time with a 21-point haul containing seven triples in their 30-point win last week.

Loughborough had ignited their title challenge with a dramatic victory over Ipswich back in December in the midst of a five-game winning run, but tripped up along the way including two losses to Solent. They endured a heavy loss as Ipswich avenged their loss to clinch the title, but battled to a two-point win over NTU last week.

Reading also finished with three wins from their final five including a heavy loss against Ipswich to drop to .500 on the season. The Rockets were unable to string results together in the league with consistency halting their charge up the standings.

Both encounters were decided by single-figure margins. Loughborough claimed victory back in November with Makana Stone’s 18 points helping secure a 64-61 success. However, Reading were victorious last month as they secured a 70-62 triumph and will be hoping to repeat the performance for a first-round upset.

Stone has been a walking double-double for the Riders and often racking up a large number of steals. Loughborough also have leading figures in Robyn Ainge and Erin Hikin alongside rising star Katie Januszewska, who spent the majority of the season with the WBBL side.

For the Rockets, Sito Gines Espinosa has had another solid campaign with her all-round game on full display, while Candela Hermida Nunez put up 22 points in the aforementioned win over the Riders.

Solent lost three of their final five in the league to drop to a 10-8 record with a 14-point loss at home to a Cardiff side that finished bottom in the standings. The team have had to adjust after losing star player Krisztina Velkey, who is expecting her first child.

NTU also only won two of their last five with a hard-fought loss away at Loughborough seeing their record fall to .500 on the final weekend. They also lost to Worcester recently with wins coming against Thames Valley and Cardiff.

Velkey and Faye Endean both netted 19 points to help lead Solent to a 75-66 success in November, but the fortunes were changed in April’s meeting in Nottingham as the hosts secured a 92-84 triumph in an overtime thriller with 25 points for Schekinah Bimpa.

Endean has stepped up to D1 level with relative ease with the young star looking comfortable for the Kestrels. American forward Erica Meyer gives Solent presence in the paint, which may prove crucial in what looks to be an interesting matchup in the front-court.

Bimpa has been a huge addition for NTU with a mammoth 31-point, 29-rebound double-double in recent weeks. They also have fellow American Mady Burdett and Dutch forward Evi Dekker, while Naomi Campbell has plenty of experience from her time in the WBBL with Sheffield Hatters.