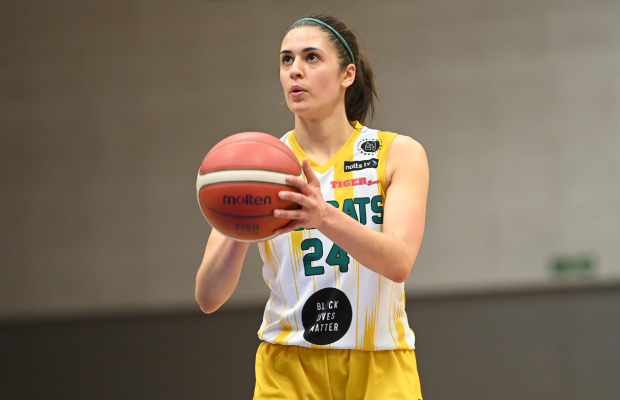 Simone Costa is embracing the challenge of stepping up for Nottingham Wildcats as they deal with adversity ahead of the playoffs.

The Wildcats lost star player Jasmine Joyner to a season-ending knee injury in March, while veteran leader Siobhan Prior has missed 11 league games and Tia Freeman has also recently been sidelined.

Costa is in her second season at the club – after joining out of Georgia University – with the 25-year-old boosting her scoring production with an average of 17.8 points per game over the last five games, including a recent best of 22 points in last week’s 21-point win over Oaklands Wolves.

Kenrick Liburd has also called upon the younger members of his roster with Praise Egharevba elevated into a starting role, while Becky Dwomoh, Shaniya Rose and Chloe Gaynor are also amongst those with increased responsibility.

“We have multiple people stepping up and taking on different roles, and I believe they have accepted it well,” Costa told Hoopsfix. “Obviously losing Jas was a blow for us, but we took it well and managed to become better every week.”

The Wildcats clinched their place in the playoffs in midweek and will guarantee a fourth-placed finish with one win from their final three games.

And, Costa hopes her side can continue their momentum ahead of the post-season having already reached the WBBL Trophy final earlier in the campaign.

“It would be crucial to go into the playoffs on a winning streak,” added Costa – a former junior international with Portugal. “It would give us the confidence we need to face the first opponent.

“It is the goal for us this weekend to win and finishing fourth is where we want to be.

“We can be very dangerous [in the playoffs] and I believe we have the capacity to perform well, especially after already playing a final this year.” Nottingham have yet to beat any of the top three sides this season in nine encounters, but are 13-2 against everyone else in all competitions and would avoid Sevenoaks, Leicester and London in the quarter-finals if they do indeed clinch fourth spot.

However, Costa relishes the prospect of going up against the best of the best in the post-season, and also picked out three main contenders for the WBBL’s top individual honour.

“I think the race for MVP now is between [Alison] Gorrell, [Cat] Carr, and [Kennedy] Leonard,” said Costa. [They are] excellent players, who have been showing consistency every week and I am hoping to face them during the playoffs.

“The league always gets better every week, teams are going up and down on the table and I think that indicates growth. I believe we have to be prepared every night to perform well.”

The WBBL playoffs are to be shown on Sky Sports with the quarter-finals played in Newcastle, semi-finals in Worcester before the final is held in Leicester.