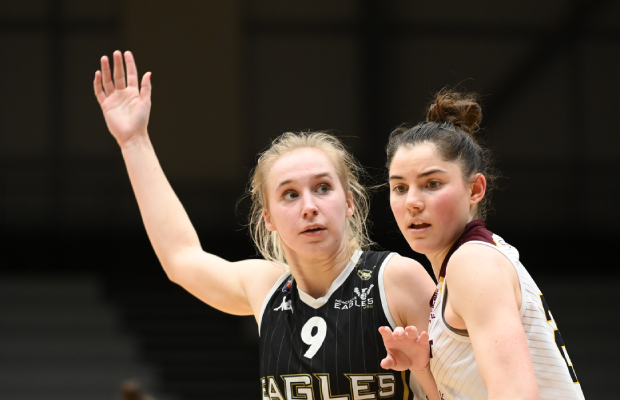 The WBBL Championship race is down to two teams, while the battle for the playoffs is also likely down to just two teams.

There are some HUGE clashes amongst the final 15 games of the regular season with lots still to be decided ahead of the playoffs.

Three more wins for the Suns to continue their pursuit of another league title – and possibly a second with a perfect record. Sevenoaks first pulled clear of Manchester for a 17-point road win before following with double-digit victories at home to Nottingham and on the road against Essex.

Cat Carr recorded a second triple-double of the season to maintain her own scorching streak with 20-12-11 against the Rebels, less than 24 hours after a 27-11-8 performance. Renee Busch fired in 21 points against Essex with Janice Monakana adding 19 points as the GB duo emphasised the strength in depth once more.

Run-in: The Suns face an upcoming double-header with Leicester that will likely secure the title, but they do also travel to Caledonia on the final day of the regular season, where the race could still be alive.

Revenge week. The Riders have only suffered two defeats on the season and they beat both of those teams to beat them this past week. First, an impressive nine-point victory over London turned the title race in a two-horse race and then, they inflicted a heavy defeat on Essex after holding the visitors to just 42 points.

It was GB’s past and future that starred against the Lions with 2012 Olympian Azania Stewart posting 17 points and 10 rebounds, while Holly Winterburn had 15-7-8 as the Riders came together down the stretch in a strong finish. Amber Smith top scored with 20 points against Essex as Leicester took their winning run to 10 games with momentum with them ahead of a monumental week.

Run-in: Sevenoaks. London. Sevenoaks. The toughest of run-ins you could probably ask for, and within a five-day span, too. Two wins over the Suns take the Lions game out of the equation, but with that game sandwiched in between, the Riders obviously cannot take it lightly with third place still a possibility.

No title for the Lions, but they can still have a say on where the Championship heads this week with a historic second-place finish also up for grabs. London fell away late on in their road game with Leicester in a nine-point defeat, and overcame a slow start against Manchester to win by 11 at home.

Kennedy Leonard dished out 16 assists to close on the 200-mark in the league campaign with the Lions’ 27-9 third period proving pivotal. Cassie Breen led the scoring with 23 points with Chantel Charles adding 20 points with the Trophy winners still without Paige Robinson.

Run-in: London take on Leicester in the reverse fixture with the chance to steal the head-to-head and boost their chances of finishing second. They close out their best-ever regular season campaign in Durham in midweek ahead of the playoffs.

The Wildcats dropped back to .500 in the league with another defeat against Sevenoaks at the weekend. Already without Jasmine Joyner for the remainder of the campaign, Tia Freeman joined Siobhan Prior on the sidelines, but Kenrick Liburd’s side still managed to be competitive.

Chelsey Shumpert finished with 25-7-5 in a full 40-minute effort with Moa Lundqvist pulling down 16 boards as Nottingham had been within three points at 54-51 with 7:11 left on the clock. They visit Cardiff this evening before a home double-header against Newcastle and Durham.

Run-in: The Wildcats have Cardiff and Oaklands to play in their final four-game stretch, so could mathematically still miss out on the playoffs, but they remain on course for a top-four finish which would avoid the top three sides in the first round of the playoffs.

The Eagles are on the verge of the playoffs having recovered from a 1-8 record earlier in the league campaign. Chris Bunten’s side have gone 6-3 since with their latest victory seeing them avenge a recent North-East derby loss to Durham.

Alison Gorrell put up 21 points, 12 rebounds and seven assists in the five-point success with Maddy McVicar adding 19 points, though they have also seen their limited depth further depleted with Jorjah Smith’s decision to return home to Australia.

Run-in: Two games remain for Newcastle and they could well have their place in the top eight confirmed before their weekend double-header with Nottingham and Manchester. All of a sudden, two wins could propel them further up the standings heading into a playoffs opener on home soil.

Three defeats for the Mystics dent their top-four hopes and they will want to avoid a further slide to prevent falling in the Championship standings. Jeff Jones’ side gave Sevenoaks and London stern tests before rounding out their week with a third double-digit loss on the road against Oaklands.

Rheanne Bailey passed 1000 points in the league with a 16-point outing against the Suns, while Nicolette Fong Lyew Quee dished out 11 assists to go with 19 points against London and Georgia Jones had 27 points and 10 rebounds in the loss to the Wolves with Mystics leading by nine in each of the two most recent games.

Run-in: Manchester take on Caledonia and Newcastle to close out their regular season campaign with a chance to get back to .500 and finish 10-10. Their playoff spot is virtually secured as it would take an unlikely set of results to see them fall into ninth.

Essex have now lost eight games in a row since their 8-2 start, though their streak technically ends having received a 20-0 victory for their scheduled game with Caledonia, which seals their place in the playoffs.

They took on the high-flying top two at the weekend with a 29-point loss at Leicester followed by a 16-point home loss to Sevenoaks having led 20-16 after the opening quarter. Lucrezia Costa posted 18 points, 11 rebounds and five assists against the Suns, while they were held to 20% shooting against the Riders.

Run-in: The Rebels host Cardiff on Sunday to close out what must still be considered a positive campaign and they will be desperate to get back to winning ways on the court ahead of the post-season, where they could face a tough opener against one of the top three sides.

A big win on the importance scale for Oaklands as they have control in the battle for the playoffs following their 10-point home victory over Manchester. Lauren Milligan led a balanced offence with 13 points, 14 rebounds and five assists with Melita Emanuel-Carr and Louise Rouse absent.

Merissa Quick continues her injury comeback with a best of 14 points from the bench with Greeta Uprus top scoring with 16 points. Oaklands poured in 28 points in the second quarter having trailed by nine early on, and they were able to close out the win to spark a run of home games to close out the regular season.

Run-in: Four games to play, four games at home for Oaklands as they look for home comforts to carry some momentum into the playoffs. If Cardiff lose tonight, Lee Ryan’s side can wrap up their place in the post-season by beating the Archers in their rescheduled clash on Friday.

A mixed week for the Archers in their encounters with the two teams at the bottom of the league standings. Cardiff began with a 15-point home win over Durham before suffering a five-point loss on the road against Caledonia to dent their hopes of the playoffs.

Shannon Hatch fired in 28 points in the midweek victory – Cardiff’s fifth of the campaign – but they were without four of their leading scorers at the weekend and fell to defeat, despite a best of 22 points from Laura Shanahan. They still remain in control of their fate, for now, but cannot afford any further slip-ups.

Run-in: Cardiff have to win at least one of their next two games otherwise their playoffs hopes will be over. They meet Oaklands on Friday and would have to win by 9+ to claim the season head-to-head between the two.

Another win for the Pride as they battled to a five-point victory over Cardiff behind monster double-doubles from Sian Phillips and Maud Ranger. The French guard finished with 24 points and 16 rebounds, while Phillips put up 18 points and 13 boards to continue a strong season.

Ella Doherty also weighed in with 15 points to help Caledonia seal their third win, though they had to forfeit their road trip to Essex given the constraints of the scheduling. A double-header on the road follows this weekend with the chance to bow out on a high.

Run-in: Still alive in the battle for the playoffs, but only just. They would need Oaklands to beat Cardiff, but lose their final three games, whilst winning all three themselves including victory over the Wolves by enough to take the head-to-head. And, they face Sevenoaks on the final day. Simple.

The Durham dream is over for the top eight as they fell to losses against Cardiff and Newcastle this past week. Claire Paxton had another big performance with 28 points, 12 rebounds and four assists in the loss to the Archers before another double-double followed against the Eagles.

They were edged out in a low-scoring encounter with Kara Elderkin held to six points as the former Eagle closes on 1000 points in the WBBL Championship and could join the club in their next outing against Oaklands on Saturday.

Run-in: The Palatinates are mathematically out of contention for the playoffs so will be playing for pride – and likely battling Pride to avoid bottom spot. Durham have a double-header on the road this weekend against Oaklands and Nottingham before hosting London in their final game in midweek.