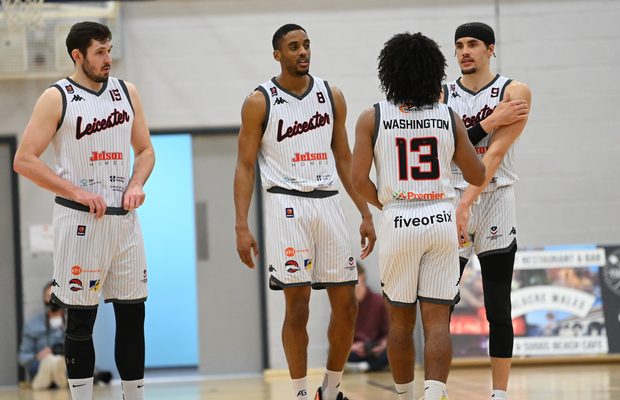 That could prove to be a decisive weekend in the title race, while the final showdown for the second piece of silverware was confirmed.

Leicester Riders re-opened their commanding lead at the top with Plymouth Raiders going on to face London Lions for the BBL Trophy.

Back-to-back defeats at the buzzer, then bounce back with back-to-back wins over your two closest rivals. A champion’s response. And, the Riders are well and truly in the driver’s seat in the title race even with 11 league games still to go.

Rob Paternostro’s side set the tone for the weekend with a dominant 26-point win away at Newcastle in front of the Sky cameras with Conner Washington one of seven players in double figures with 21 points off the bench. Leicester then claimed an important five-point win over London with big plays from Darien Nelson-Henry down the stretch, while Geno Crandall and William Lee both had double-doubles.

The Lions are heading into their second final of the season, but were unable to make up ground in the title race with their five-point loss on the road against the Riders. They had led 57-61 at the start of the fourth, but came up short in a tense finale.

The Cup runners-up wrapped up a convincing semi-final victory over Glasgow in midweek before returning to league action with a comfortable 24-point win at home to Manchester with Kevin Ware and Dirk Williams combining for 47 points. They’ll take on Plymouth in Sunday’s final, in Worcester.

The run continues for the Raiders as they are now a game away from a second piece of silverware in the BBL. Paul James’ side backed up a seven-point win at home against Surrey in the first leg with a dominant display on the road to set up a final clash with the Lions – doing so without Ashley Hamilton.

Rickey McGill had a huge weekend, combining for 63 points across the two legs including 32 at Surrey Sports Park as the visitors ran riot in the final quarter to rack up a hefty aggregate success. McGill’s 31 in the first leg were supported by 20 from Mike Morsell as the Raiders gained the upper-hand to take on the road.

Now it’s time to really take Cheshire seriously. Their unpredictable nature of results has actually been amongst a remarkable run that has now propelled them into third spot in the league standings with 12 wins on the board, despite playing more games.

It marks an impressive turnaround from their early-season struggles with nine wins from their last 11 in the league. Kahron Ross put up 25 points in the six-point road win at Bristol on Friday night before sinking the game-winner to deny Manchester at home as all five starters hit double figures in 34+ minutes of action.

Ouch. The Eagles-Riders rivalry has been the biggest in the BBL for the past decade so any defeat hurts, let alone a 26-point loss on your home floor. That was the case for Newcastle in the Sky Sports showdown, and while they remain in second place – they are now four wins adrift of the runaway leaders.

It’s been a tough spell for the North East side, though they have now got Justin Gordon back onto the court, which should help spark them back into form. They were outscored in all four quarters against Leicester and were unable to have their say on the defensive end. Next up, a trip to face the Scorchers.

Their current 11-10 league record seems a fair reflection for the Sharks, who at times have looked a side capable of being amongst the top-four. It was a mixed weekend at Ponds Forge as they were beaten late by the visiting Wolves before holding off a spirited fightback from Bristol.

Jordan Ratinho had 20 points on Friday night and had given Sheffield the lead late on, only for the visitors to respond to take the victory. Atiba Lyons’ side then led by as many as 18 against the Flyers, but needed late free throws from Kipper Nichols to ice the game and keep his side with a winning record, just.

The Wolves recorded a fourth straight win on Friday night with another game-winner from Lamarr Kimble to return to .500, but failed to make it five on the bounce as they fell to defeat on the road in Glasgow.

Worcester saw a lead as large as 12 turn into trailing by one before Kimble stepped up to finish with a team-high 15 points in the win. It would have seen a rise in our rankings, but their winning run came to an end as they got off to a slow start against the Rocks and never really clawed back the deficit – though they maintain a gap on the teams below them in the battle for a spot in the top eight.

The Flyers’ return to action resulted in two tough defeats as they lost by six at home to Cheshire before a three-point loss on the road at Sheffield, though they do remain in the coveted eighth spot in the race for the playoffs.

They were without Ben Mockford and Raphell Thomas-Edwards for the weekend with Daniel Edozie joining them on the sidelines on Sunday. Marcus Delpeche was inserted into the starting lineup and put up 27 points and 11 rebounds having also recorded a double-double in the previous game with an 11-26 final period creating a late scare for the Sharks.

It wasn’t to be for the Scorchers in their bid to make the BBL Trophy final as they suffered a heavy loss at home in the second leg having kept themselves in contention on the road.

Surrey trailed by seven points with Tony Hicks netting 27 points on Friday night at the Pavilions, but it was a different story on the Sunday as they were beaten by 29 points with Hicks again leading the scoring with 22 points. The Scorchers have a tough upcoming double-header this week as they look to close the gap.

The semi-finals proved a step too far for the Rocks as they were comfortably beaten by London over two legs, but Gareth Murray’s side bounced back in style with a seven-point home win over Worcester to keep their hopes of a surge to the playoffs alive – now trailing eighth by three wins.

Ronald Delph posted 27 points and 10 rebounds in the win with Christian Keeling adding 20 points as the starters combined for 79 of the 88 points as the Rocks opened up an early seven-point advantage, which would prove to be the final margin. The teams meet again in Worcester on Friday night.

One league win in their last 12 since beating Surrey to move to a 5-3 record in January. They have dropped outside of the top eight during that baron spell and now have the same number of defeats as bottom-placed Glasgow.

On the bright side, they have the same number of wins as eighth-placed Bristol and have now appointed Lloyd Gardner as head coach until the end of the season – with a talented roster to work with. The Giants lost by 26 points at the Copper Box before an agonising two-point loss at Cheshire with Aaron Geramipoor top scoring with 21 points in the absence of Jordan Satchell.