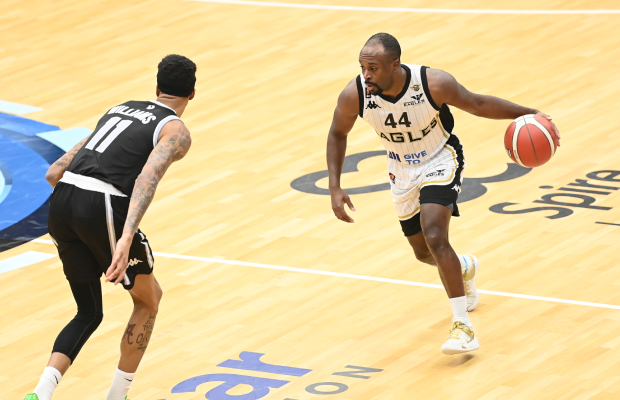 The 2020-21 BBL season reaches its conclusion as London Lions meet Newcastle Eagles to decide the playoffs winners, in Leicester.

There was plenty of drama in the semi-finals with London recovering from a 12-point first leg deficit to overcome Plymouth Raiders for a 180-172 aggregate triumph. The Lions were beaten 80-92 in Tuesday night’s first leg, despite a triple-double from DeAndre Liggins.

They raced out of the blocks on Thursday to lead by 15 inside the first quarter before being pegged back. Liggins top scored with 23 points to propel his side through as they outscored their opponents 27-17 in the fourth to win 100-80, though the win was marred by an ankle injury to Justin Robinson – who had 20 points.

Newcastle were first to book their spot in the final as they too had bounced back from a first leg defeat. Ian MacLeod’s side had been as many as 20 points down early on against Leicester Riders, so an eventual one-point loss would have felt like a win with Rahmon Fletcher firing in 34 points.

The Eagles made a much brighter start in the second leg to take control and they survived a fightback from the league champions to turn on the style in the final quarter to claim an 88-69 success to win by 18 on aggregate with Fletcher pouring in a further 27 points.

Newcastle claimed the head-to-head in the league series, though they would finish five wins adrift of their rivals. Justin Gordon netted 26 points in a league-opening 88-79 victory before winning 109-95 in March behind a triple-double from Cortez Edwards, while Louis Sayers dropped 24 points.

The Lions had claimed a convincing 109-89 home win in January, just a couple of weeks before they met to determine the first piece of silverware in the Cup. However, COVID-19 issues struck the Lions with several absentees as Newcastle triumphed 84-77 with Gordon landing the Finals MVP award.

The two teams had traded road wins in the group phase with Newcastle opening the season with a 79-89 success at the Copper Box before London returned the favour with a 79-99 triumph to boost their hopes of advancing. In the Trophy, the Lions enjoyed a 101-85 victory in February on their way to winning the title.