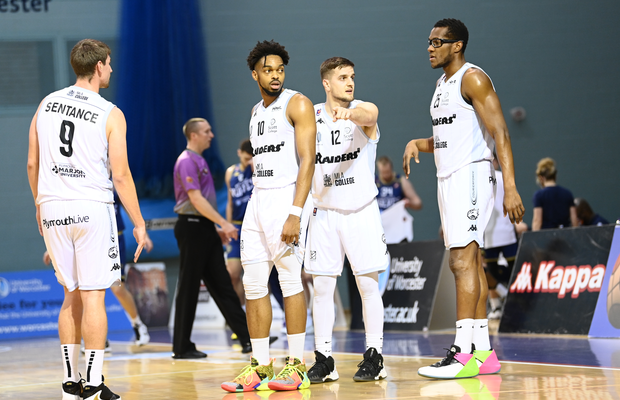 Another week, another game-winner at the buzzer with the title and playoff races continuing to twist in different directions.

The gap has closed once more at the top, while teams are starting to bunch together in the battle for positions in the top eight.

Leicester were embroiled in a topsy-turvy encounter away at the Phoenix on Friday night, despite an early double-digit advantage. A late rally was needed and they moved ahead from the foul line, only to see more last gasp drama go against them. Geno Crandall and Corey Johnson had 21 points each in defeat.

No league action for the Lions this past week, but their title hopes were boosted with another loss for the Riders with Vince Macaulay’s side four wins adrift with three games in hand.

Their immediate focus is on the BBL Trophy, however, and they now have at least one foot in the final after their convincing 24-point win at home to Glasgow in the first leg. DeAndre Liggins – who had to miss the Cup final – led the rout with a 28-point haul with the reverse fixture taking place in midweek before London take on Manchester and Leicester in the league this weekend.

Yep, Plymouth deserve more credit. A 13-point win away at Newcastle made it eight wins from their last nine in the league – and they did so without star player Ashley Hamilton. Paul James’ side moved above London in the standings, though they are only one win ahead having played five extra games.

It was an all-round team display at the ECA with four players in double figures including Chris Porter-Bunton, who finished with 13 points, 11 rebounds and six assists. From a precarious position at 3-7 to an 11-8 record in the league with a two-legged semi-final against Surrey to come this week.

Small bit of noise coming from the Eagles in the stand… hopefully they enjoyed this one pic.twitter.com/gqyyRHQ6LO

The Eagles have more wins than any other team in the BBL this season, but there’s no doubt they are going through a tough patch – compounded by the loss of Justin Gordon. They suffered a 13-point loss at home to Plymouth on Friday night, but were able to recover well with a strong finish securing a 25-point win at Manchester.

The middle periods proved costly against Plymouth, while they outscored the Giants 12-23 in the fourth on Sunday with Rahmon Fletcher posting 23 points and 12 assists as Evan Maxwell and Cortez Edwards also netted 20 points. Newcastle remain in second spot with a potentially huge meeting with the Riders on Friday night.

If you want a team that sums up the BBL this season, then look at Cheshire. Three wins in a week followed by consecutive losses proving anyone can beat anyone, and not even Nostradamus could accurately predict the outcomes on a weekly basis.

Yep, of course Cheshire came back this week with wins over Leicester AND Sheffield to move back above .500 in the league. Kahron Ross was the hero on Friday night to seal a stunning victory against the Riders at the buzzer to finish with 29 points, while they sealed a series sweep over the Sharks with a six-point success behind 17 points from Jimbo Lull along with several other contributions.

Check out some of the best plays from last night’s win against @RidersBball!

Ok, then. Two wins over Newcastle and an impressive victory against London saw the Sharks break into our top four, but they were below par this past week on their travels with successive defeats coming against Worcester and Cheshire.

Sheffield let up 57 points in an eventual 16-point loss in midweek before suffering a second loss to Cheshire in the space of a few weeks as they went down by six points. Antwon Lillard had 21 points and nine rebounds in Sunday’s defeat with their offensive struggles coming to the fore again.

Momentum is with the Wolves right now. From a 5-9 record on the edge of the playoff spots, Matt Newby’s side have defended home court with three straight wins to create a bit of distance from the teams below them.

Backing up their win over the league-leading Riders at the buzzer, Worcester emphatically brushed aside Sheffield in a 16-point win before coming from behind to beat Surrey on Sky Sports. Brandon Anderson had 22 points in the midweek victory and was also joint leading scorer against the Scorchers, sharing 40 points with Jordan Williams. They meet Sheffield again on Friday as they head on the road.

No action for the Flyers this past weekend after their games were postponed. They’ll be pleased to see that they remain amongst the top eight in the league although games in hand will cause for a congested schedule that continues with games against Cheshire and Sheffield this weekend.

Surrey led by as many as 11 points in their road clash with Worcester on Sky Sports, but eventually fell to a seven-point loss with a missed opportunity to close the gap. They were quick to bounce back with a comfortable win at home to Glasgow less than 24 hours later to move to five league victories.

The Scorchers pulled clear in the middle periods against the Rocks with four players scoring at least 12 points in a balanced attack. Ryan Richards had 21 points on 10-of-14 shooting in Friday night’s loss with his side now three wins adrift of seventh-placed Worcester with their Trophy semi-final up next.

Manchester remain in ninth spot in the league as they were well beaten at home to Newcastle in the first game of the post-Danny Byrne era. The Giants fell away in the second half to drop to a 6-12 record having played three games more than Bristol, who occupy the coveted final playoff spot.

Aaron Geramipoor top scored with 16 points on his debut with 15 points apiece from Sam Cassell and Donovan Marshall-Johnson. They head on the road this weekend with trips to face London and North-West rivals Cheshire in the hope of inspiring a change in fortunes.

It feels a lifetime ago, but it was around this time last year that the Rocks were well set at the top of the BBL Championship. 12 months on, and they are rooted to the foot of the standings with their playoff hopes looking increasingly thin – although the season has not been a complete disaster by any stretch.

Another tough weekend began with a 21-point loss away at Surrey before losing the first leg of their Trophy semi-final by 24 points against London to leave a couple of mountains to climb at home on Wednesday. Ronald Delph had 16 points and eight rebounds in a 40-minute effort with an improved second-half showing something to build upon.