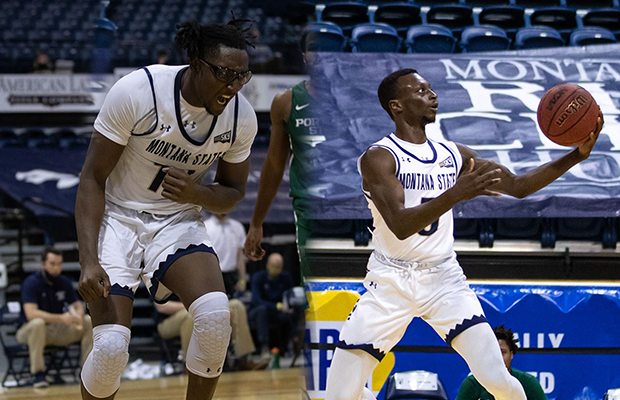 British duo Amin Adamu and Jubrile Belo have both been named to the All-Big Sky Conference Third Team, as voted on by the league’s head coaches.

Adamu earns his first all-league honours of his college career, whilst Belo is a repeat selection to the All-Big Sky Third Team – the duo help the Great Britain Under-20s to Division A promotion in 2017.

Adamu earned his first all-league honours as he led MSU in scoring (14.7 PPG). He finished atop the Big Sky in steals per game (1.63), finished fifth in qualifying field goal percentage (49.1%) and seventh in free throw percentage (80.6%).

The former City of London Academy and Barking Abbey guard scored in double digits in 15 of 19 games played. His breakout performance came on Jan. 9 when he recorded a career-high 36 points on 13 of 23 shooting to pace MSU in a win at Northern Colorado. That scoring effort is among the top 20 single-game outputs in program history.

Belo earned back-to-back Third Team honours after averaging 13.4 points and 5.6 rebounds per contest. He finished the season with a 61.8 field goal percentage and was among the top five in the Big Sky in blocked shots per game (1.05), double-doubles (3), free throws made (90) and attempted (120).

The former Barking Abbey big man claimed Big Sky Player of the Week following a series sweep over Portland State this season. He ended the scheduled by tying a program record going 13 of 13 from the field and set a new career high of 32 points in MSU’s season finale versus Sacramento State.

.@jubrilebelo13 went OFF – 13/13 from the floor to tie an @msubobcatsmbb school record, finishing with a career-high 32 in a heartbreaking 1 point loss to finish out the regular season. 🔥🇬🇧🏀#BritishBasketball pic.twitter.com/iRQh5ihFmp

Montana State is scheduled to next take on Idaho State in the Big Sky Conference tournament quarterfinals. The Bobcats and Bengals will tipoff at Idaho Central Arena at approximately 2 p.m. on Thursday.