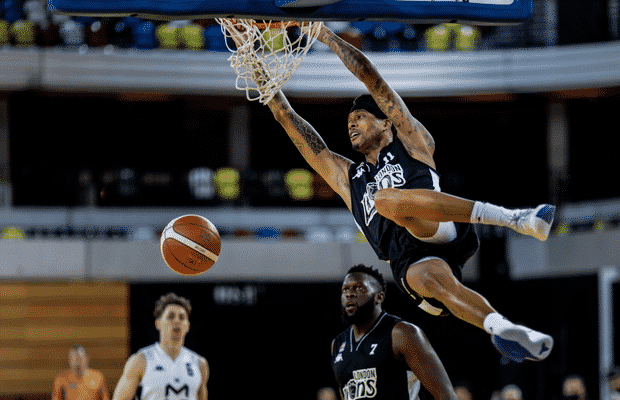 More postponements, a heartbreaking forfeit and the Lions looking in control.

That was the general state of affairs around the league this past week with a reduced schedule, while the BBL Cup final is now set.

Things are starting to look how they were expected to for the Lions. Top of the league by two wins, into another Cup final with their next European venture set to start later this month. Vince Macaulay’s side climb into top spot in our rankings and could be set for a lengthy stay as they live up to their pre-season billing.

The Lions put on a show at the Copper Box as they handed Newcastle a 20-point defeat in the top-of-the-table clash before easing to a 17-point victory at home to Glasgow. Dirk Williams and Chris Tawiah combined for 46 points against the Eagles with the two teams to meet again in the Cup final.

The Eagles will compete for the chance to win their sixth BBL Cup title after they overcame fierce rivals, Leicester, in a tight semi-final battle. Justin Gordon hit a big three down the stretch as they closed with a 6-1 run with Evan Maxwell and Cortez Edwards combining for 37 points in the win.

Newcastle will face London in the final in Worcester and will hope for improved fortunes having met the same opponents in the league on Friday night. They suffered a 20-point loss to drop to 5-2 in the Championship standings, though they remain second ahead of a weekend double-header against Sheffield and Plymouth.

The Riders began the past week with yet another win over Plymouth as they returned to winning ways in the league, but saw their Cup run end on Tuesday as they suffered a five-point home loss to Newcastle.

Rob Paternostro’s side held the Raiders to just 10 points in the third on their way to a six-point success with Geno Crandall top scoring with 19 points. They had five players in double figures in their semi-final defeat in a game that was tied at 70-70 with 2:37 remaining.

A 10-point derby victory in front of the Sky Sports cameras was soon followed by the announcement of their Cup semi-final forfeit due to the COVID-19 regulations. The Giants had multiple cases over the Christmas period and had only just returned to action, as another positive test has denied them a chance at history.

Manchester jumped out to a 16-point lead against Cheshire, despite their lack of recent game time, but saw their advantage erased by the third. They put together a strong finish to take the win and move to 4-3 with Breaon Brady posting 18 points and 17 rebounds in the win.

Sheffield had the chance to continue their recent momentum, but their scheduled encounter with Cheshire was postponed on Sunday. Atiba Lyons’ side sit in fourth spot and could leapfrog Newcastle with victory at Ponds Forge on Friday night, whilst then heading on the road to face Glasgow.

Just one league win in six since starting 2-0 heading into a double-header with Leicester and Newcastle. Their losing run against the Riders extended to 30 games last Thursday as they fell to a six-point defeat on their home floor.

Ex-Newcastle forward Mike Morsell made his debut with 26 points off the bench with Ashley Hamilton adding 18 points as the Raiders were held to just 10 points in a pivotal third period. An early injury to Will Neighbour saw him join Prince Ibeh on the sidelines and Paul James’ side will need to be healthy ahead of a big test this weekend.

A much-needed win for the Wolves as they got the better of the Rocks by six points on Sky Sports in what was Matthew Bryan-Amaning’s last game of his spell. The experienced vet led the way with 21 points to cap a monumental effort during his latest stint in the BBL.

Worcester also had an 18-8-5 display from Jordan Williams with Maarten Bouwknecht absent and will be looking for more from their American quartet given MBA’s departure. A second win has them on the edge of the playoff spots with a double-header against Cheshire and Bristol providing a chance to make their move.

Thank you to the @BBLWolves organisation for the last 6 weeks or so. Well ran club with a good bunch of guys on the court. Thank you to @MatthewNewby17 for the opportunity and all his efforts as he does A LOT behind the scenes that the fans don’t realise.. Thanks again #WolfPack

Another weekend away from the action for the Flyers, but they are set to return on Friday night as they welcome the league-leading Lions to the SGS before hosting Worcester two days later. GB duo Teddy Okereafor and Ben Mockford are here to stay and Bristol will be looking to build upon their current position in sixth place.

Cheshire were unable to make it back-to-back league victories as they fell to a double-digit defeat against Manchester on Sky Sports, in Worcester. Ben Thomas’ side bounced back from a slow start, taking a lead in the third having been down 16 early, but were unable to sustain their momentum in the fourth.

Jimbo Lull put up 23 points and 12 rebounds, while Kahron Ross had 13 points, 13 assists and five steals in defeat. It could be a pivotal upcoming weekend, even at this stage, as the Phoenix visit Worcester before hosting Surrey in a double-header against the two sides that they are wedged in between in the standings.

Surrey are still waiting for their first action in 2021 as their weekend game with Plymouth was postponed with ‘multiple players deemed unfit to play’ following positive cases for COVID-19 over Christmas. They are set to face Cheshire this weekend – the last team they beat, a month ago.

It’s now five straight defeats for the Rocks since their memorable win on the road at Plymouth, exactly one month ago. They battled until the end in a six-point loss on Sky Sports against Worcester before a 17-point loss on the road against the Lions.

Christian Keeling had another strong outing on Friday night with 20-5-6, while Isa Brandon top scored with 20 points less than 24 hours later with Ronald Delph posting 12 points and 12 rebounds as he made his debut over the weekend. Glasgow welcome Sheffield to the Emirates Arena looking to snap their losing run on Sunday.