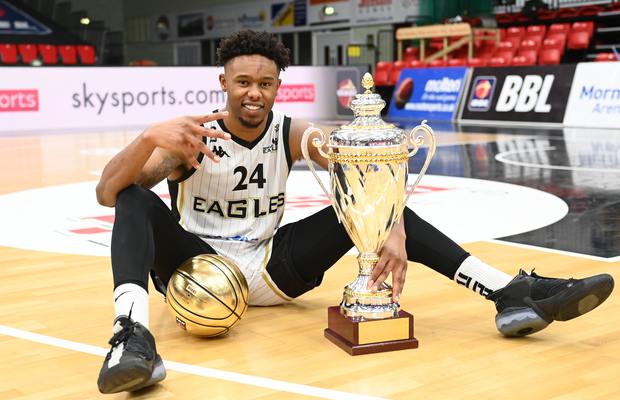 All eyes were on the BBL Cup final on another dramatic weekend in the BBL.

Newcastle Eagles prevailed against a London Lions missing several players due to the COVID-19 protocols, but the two teams still played out a thriller at the Morningside Arena.

You have to feel for the Lions. Their summer of recruitment was all geared towards their maiden European voyage, only to be denied by COVID at the final hurdle after six positive tests led to their forced withdrawal from the FIBA Europe Cup competition. A blow for all of British basketball.

They were still able to compete in the Cup final on Sunday with DeAndre Liggins amongst several absentees and the Lions’ remaining seven put in a courageous display to turn a 15-point deficit into a 76-69 advantage inside the final quarter. However, they ran out of steam late on and saw their first chance of silverware fall out of reach.

Another final, another piece of silverware for the Eagles. Ian Macleod’s side came through a tricky spell in the fourth quarter to pull out a 12-0 run when it mattered most as they secured a seven-point victory in Sunday’s Cup final.

Justin Gordon took home the MVP award with 17 points and 15 rebounds – including a crucial offensive board late on – while Rahmon Fletcher was his imperious best with 21 points and eight assists to help land another Cup title for the Eagles. Back in league action on Friday to host Bristol before the start of their Trophy defence.

The Riders had been due to play two games in Worcester at the weekend, but that transpired into just the one on familiar territory and they closed the gap on the top two in the league with an emphatic victory over Glasgow – making 14 threes on 51% shooting.

Corey Johnson led the way with 20 points, eight rebounds and four assists with no other player featuring for more than 25 minutes as the Riders were able to spread the minutes throughout their roster. Two more home games follow this weekend as they welcome Sheffield and Surrey following a schedule re-shuffle.

Back to action and back in full flow for the Giants as they recorded a 14-point success on the road at Surrey. Danny Byrne’s side moved to 5-3 in the Championship with the victory to consolidate their position in fourth spot.

The third quarter proved pivotal as Manchester outscored their opponents 25-8 with Breaon Brady finishing with another double-double with 20 points and 12 rebounds, while Sam Cassell added 19 points and seven assists. A trip to Plymouth precedes another North-West derby clash with Cheshire on Sunday.

The Wolves have had to postpone multiple games following self-isolating requirements with the team set to return to action the following weekend in a scheduled visit to face Newcastle.

Much more like it from the Raiders as they picked up not one, but two important victories over the past week. Plymouth returned to winning ways in the league after holding off Cheshire before overcoming Sheffield on the road to advance in the Trophy in successive six-point successes.

Mike Morsell had 23 points in the league win, while Will Neighbour top scored with 19 points in Trophy with Ashley Hamilton adding 18 points, 10 rebounds and four assists. Paul James’ side have played more league games than any other side at this point and host fourth-placed Manchester on Friday night.

The Brit factor @Agphamilton and Will Neighbour combined for 37 points in yesterday’s win over the Sharks 🦊 pic.twitter.com/kduLecYaNP

Two defeats last weekend were followed by a first-round exit at home in the Trophy with the offence failing to fire once again for the Sharks. They shot 23% from three-point range in a six-point loss to Plymouth and were held to just 63 points.

Jeremy Hemsely and Jordan Ratinho combined for 30 points in defeat with Sheffield falling away in the middle periods before a 21-11 final period. They return to league action with a tough trip to face Leicester on Friday to close out the month.

No action for the Flyers as they sit in eighth spot in the Championship standings ahead of a double-header with the Cup champions this week. They host Newcastle in the Trophy next Tuesday evening, following a trip to the ECA in a league encounter on Friday.

A valiant effort on Friday night saw Cheshire rally in the fourth to push Plymouth close before an eventual six-point defeat. The visitors poured in 30 points in the final period, but it was not enough as they missed out on the chance to close the gap on sides above them.

Jalen Hayes had 24 points and six steals with Kahron Ross adding 16 points with the rest of the scoring spread out throughout the team. The Nix face another encounter with Manchester on Sunday and defeat could see their North-West rivals begin to move out of reach.

Not an ideal showing on Sky Sports for the Rocks, but it was a tough task facing an in-form Riders side on the road. Glasgow were held to just 22 points in the first half with the gap already ballooned to 26 points, and there was no way back.

Marc Kwedi and Christian Keeling had 11 points each in the loss, though the Rocks remain just a win outside of the playoff places in 10th spot. Gareth Murray’s side face bottom-placed Surrey at the Emirates Arena on Friday night with a chance to start their ascent.

Another defeat for the Scorchers sees them drop to 1-5 in the Championship as they remain at the foot of the standings. They have only played six league games so far, but that will mean an increased schedule over the coming months.

Surrey had a narrow lead over Manchester at the half on Saturday, but were outscored 25-8 in the third period which would prove decisive. Connor Cashaw top scored with 20 points in defeat with Lovell Cook the only other player in double figures with 11 as the Scorchers next face a trip to Glasgow, on Sky Sports.

Creon Raftopoulos reflects on another defeat during the Scorchers Post-Game show.#OneGoal 🔥 pic.twitter.com/gHCOCrIl1H