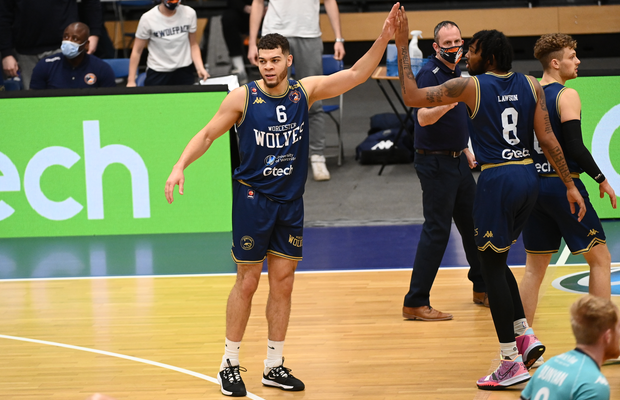 The BBL Championship action is hotting up with the league table beginning to take shape midway through January.

The top three are beginning to separate themselves from the middle pack, while six teams are separated by just a single win in 4th-9th with more movement expected in the coming weeks.

The Lions keep rolling as they maintained top spot in the Championship standings with a comprehensive 28-point win on the road against Bristol. The visitors jumped out to a 30-11 advantage through the first quarter and never looked back with DeAndre Liggins leading a balanced attack with 17 points, seven rebounds, seven assists and four steals.

London seem to have put their early season struggles behind them and will be favourites to secure the first piece of silverware on offer when they take on Newcastle in Worcester, on Sunday ahead of their FIBA Europe Cup venture in Poland at the end of the month.

Two wins from two for the Eagles heading into this weekend’s Cup final. Darius Defoe and Justin Gordon came up clutch down the stretch, combining on the defensive end to secure a one-point win over Plymouth, two days after they beat Sheffield on the road in front of the Sky Sports cameras.

Newcastle led by as many as 21 before an eventual eight-point victory with Cortez Edwards and Rahmon Fletcher scoring 18 and 16 points, respectively. The Eagles returned home and came through a thriller against Plymouth with a pair of free throws from Defoe putting his side ahead in the final seconds to take them to 7-2 in second spot.

31-0. That is Leicester’s record against Plymouth in their last 31 meetings – a BBL record for consecutive wins against an opponent. The Riders have been consistent performers since the regular season began with their only defeats coming against the Lions and in the Cup semi-final against Newcastle.

Plymouth were still within a single score early in the fourth, but Leicester finished strong to take a 12-point win behind an incredible stat-line from Geno Crandall with 18 points, 17 rebounds and eight assists, while Conner Washington weighed in with 22 points. With three games in hand on the top two, they have a chance to close the gap as they face Worcester on the road and host Glasgow this weekend.

🔥🔥🔥 League Record broken: Riders have the greatest ever H2H run in @BBLofficial history with a 3️⃣1️⃣st consecutive victory over Plymouth stretching back to 2012/13.

No game this weekend for the Giants with isolation period continuing for members of the squad. They are set to face Surrey on the road this weekend as they now find themselves amongst the top four in the league standings.

The Wolves were in a precarious position with one league win in five, but their fortunes are starting to change as they moved to .500 with a double-winning weekend. Micah Elan was the hero on Friday night with his game-winner putting a halt to Cheshire’s fightback, while they earned a three-point win on the road at Bristol.

Jordan Williams starred in the home win with 24 points, six rebounds and nine assists and added a further 18 points against the Flyers, while Brandon Anderson led the way with 21 points from the bench. The Wolves take their win streak into an intriguing clash with Leicester on Friday night.

Things were looking bright for the Sharks, but they lost their bite this weekend having gone into Friday’s clash with Newcastle with a chance to break into the top three. However, an eight-point home loss was followed by a disappointing 11-point defeat in Glasgow to see them lose ground.

Jeremy Hemsley top scored with 20 points in the Sky Sports clash with Newcastle as they were outscored by 20 points in the middle period and only managed to make the final scoreline respectable with 33 points in the fourth. On Sunday, Sheffield were held to 40% from the floor after going 1-of-14 from three-point range as they struggled to get going against the Rocks.

Plymouth are the first team to play 10 league games this season and few would have predicted just three wins, especially given their 2-0 opening. But, the Raiders have hit a poor run – still without Andrew Lawrence and integrating new pieces – though they did come close to beating Newcastle on the road, which stops them sliding further down our rankings.

Paul James’ side were competitive early in their 12-point loss at home to Leicester, but pushed the Eagles all the way having led by four inside the final minute. Ashley Hamilton was denied in the final seconds to leave the Raiders a long trip back home, falling agonisingly short. Wednesday’s game against Cheshire feels like a must-win.

It could have been a perfect weekend for Ben Thomas’ side. They picked up a vital five-point win at home to Surrey on Sunday, but were beaten at the buzzer by Worcester on the road less than 48 hours earlier.

It was an impressive fightback from the Phoenix as they had trailed by 15 points at 65-50 with 5:48 on the clock, but were undone on the final possession. Mike McCall ensured another comeback would stick this time around against Surrey with 20 of his 28 points in the fourth to seal an important win with Jalen Hayes putting up 31 points along with 14 rebounds.

A tough weekend for the Flyers as they returned to action with a double-header at home. Bristol trailed by 19 after 10 minutes against the high-flying Lions and never recovered on Friday night before an agonising three-point loss to Worcester, though they did see Josh Wilcher back on the floor.

Daniel Edozie posted a double-double of 19 points and 10 rebounds in Sunday’s loss with the Flyers also handing a debut to new American recruit Justin Baker over the weekend to strengthen their roster following recent injuries. They’ll next be in action in the North-East with a difficult trip to face Newcastle.

It’s now five straight defeats for the Rocks since their memorable win on the road at Plymouth..

The Rocks were due another memorable win (any win, in fact) and this time, it came on their home court as they claimed an 11-point win over an in-form Sheffield side – even more impressive considering they only scored 65 points themselves.

After an 8-8 opening period, Glasgow gradually pulled away with Boban Jacdonmi scoring 18 points on an efficient 9 of 13 shooting on a night where both sides struggled to find their range. Christian Keeling added 13 points to help the Rocks double their league win tally as they now head to Leicester on Sunday evening.

In their first game for almost a month, the Scorchers would have been forgiven for making a slow start. However, they scored 49 points in the first half and led by as many as 13 on the road against Cheshire. It was the final quarter that proved costly as a 71-78 advantage inside the final five minutes was followed by a decisive 12-2 run from the hosts.

Tony Hicks scored 24 of the 38 points from the bench, while Martelle McLemore added 15 with the Scorchers now rooted to the bottom of the Championship standings, albeit with multiple games in hand. They’re back at home this weekend with Manchester rolling into town.