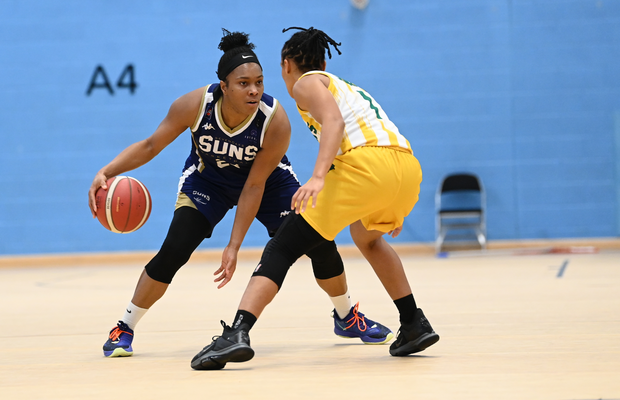 And then there were two. The WBBL Cup final is set, while the focus now turns to the regular season this weekend with four games on the menu.

Sevenoaks Suns and Leicester Riders will battle it out for the first piece of silverware in January’s final and both teams are on the road this weekend to start their WBBL Championship campaign.

The defence of their Cup title rolls on after the Suns came through a tough battle with the Wildcats at Surrey Sports Park, on Saturday. Renee Busch and Janice Monakana found their range from outside once again as they combined for 41 points with a total of nine three-pointers.

Cat Carr was instrumental with 14 points, 12 rebounds and seven assists in a full 40-minute effort with Lavinia Da Silva coming up with key baskets in the fourth on her club debut. Sevenoaks keep winning and make a trip to the North-East this weekend to face Newcastle Eagles in the league.

It’s a bit of a cop out to go with joint leaders in our rankings, but it doesn’t sit right having Leicester Riders in second spot given their start and it’s tough to drop an unbeaten Sevenoaks Suns. And, the two teams are clear at the top and could remain unbeaten until they face each other in the Cup final.

The defence has been no joke from the Riders – absolute domination. After conceding just 55 points per game during the group phase, Jesper Sundberg’s side held Cardiff to a mere 14% from the floor for just 27 points on Saturday.

Ella Clark posted 15 points and 13 rebounds, whilst playing a key role on that defensive end as well as Kate Oliver, who had five of the eight blocks for the Riders. They start on the road in the league against an Oaklands Wolves side desperate to take to the court, and the two teams did meet in pre-season.

The Wildcats came up just short of pulling off a big win over Sevenoaks as they were edged out by a narrow two-point margin in the semi-finals. Chelsey Shumpert and Jasmine Joyner combined for 43 of their 67 points as they needed some extra scoring support, though Tia Freeman hit a couple of big shots down the stretch.

Shumpert had the chance to force overtime as the Wildcats have hauled themselves back into contention from a double-digit deficit from the fourth, and can take heart from their display. Attention turns to the league this weekend and they start at home as they entertain fellow beaten semi-finalists, Cardiff.

The Eagles had a much-needed weekend off after failing to make the semi-finals having been hit hard by injuries already this season. Jorjah Smith is up and running after her debut last time out, and Chris Bunten’s side start with another clash with Manchester as they look to repeat their victory from the Cup meeting.

Another weekend off for the Lions with their originally scheduled opener against Essex Rebels pushed back, so they start next week at home to Newcastle in a crunch clash. Kennedy Leonard and Shanice Norton have quickly formed a dynamic partnership in the back-court and Chantel Charles enjoyed a strong start to a two-year spell with the club.

The Mystics will be looking to put their Cup campaign behind them this weekend as they take on Newcastle in the league in search of their first win. Another new addition to the squad sees a return to the sport for former junior international guard Rosie Hynes, to add further depth to the Mystics roster.

Still waiting for their first action on court, the Wolves are scheduled to finally open their season against Leicester Riders this weekend when the WBBL Cup finalists make the trip on Saturday. Oaklands have several key returnees on their roster along with exciting additions of Amari Carter and Merisa Quick to bolster their offensive firepower.

It was a tough challenge for the Archers in their maiden WBBL semi-final and they ultimately fell to a 40-point defeat at Leicester. Cardiff struggled to get anything going inside the paint and despite some early outside shooting success, they were held to just 27 points.

Shannon Hatch hit double figures with 10 points and the Archers face another testing encounter this weekend as they travel to face the Wildcats to begin their regular season.