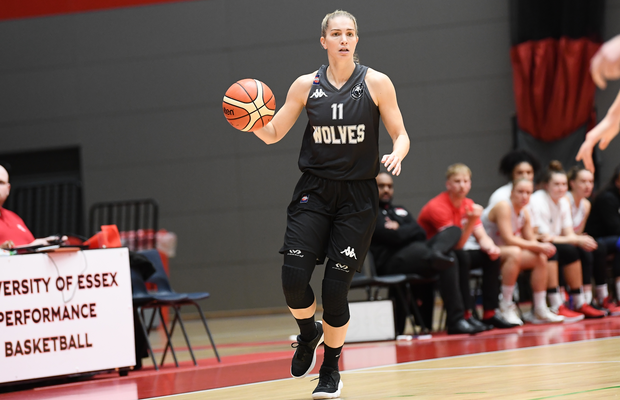 Lizzy Harrison developed in the Oaklands academy and is now entering her fifth season in the WBBL with the Senior side.

It’s been a frustrating year, with the Wolves announcing yesterday that their season will now start in 2021, though Harrison has been looking to expand her repertoire off the court in pursuing photography and graphic design.

The 28-year-old combines her playing role with a full-time marketing job at Oaklands College and was able to find time to work on personal projects during lockdown earlier this year.

“Working from home in lockdown, it was weird not having basketball,” Harrison told Hoopsfix. “I’m always really busy so to have a lot of free time, it took time to adjust to that.

“As with a lot of freelance designers, there was extra time for personal projects in lockdown.

“You don’t always do what you want to do, so this was a chance to do just that and try creating new things.

“I was watching YouTube videos, listening to podcasts and reading just to learn as much as I can.”

Harrison was part of the media team at the 2019 Hoopsfix All-Star Classic and while her work has predominantly centred around her role at Oaklands, the desire is there to branch out and help the promotion of British basketball.

“It’s definitely something I want to pursue. I love basketball and want to help raise the profile of the sport here. There’s some amazing clubs around the country and it’s being able to put the images out there.”

However, it might not have been basketball. Harrison started out relatively later to others having been a keen track and field athlete before finding basketball and moving to the academy at Oaklands for three years.

The prospect of heading to America as a student-athlete quickly became an ambition for Harrison, though the experience was tougher than expected – as can often be the case with British players.

“I wanted to be an Olympian track athlete,” she admits. “I just wanted to be the best at whatever I do. I wanted to make a National Team in basketball and that never happened, but I found other things.

“As soon as I realised I could travel and get an education, it was something I wanted to do and worked towards.

“You can talk about it a lot before you go, but it is completely different when you’re there and living it.

“Athletically and physically I was fine, but skill-wise I felt like I had a lot of catching up to do.

“It was definitely diving in at the deep end.” The lure of overseas basketball was never seriously considered upon her return and there was only one place that Harrison was to be drawn to – back to where her basketball journey really began.

“Oaklands being in their first season in the WBBL was an amazing thing and things just fell into place,” she explained.

“After being away from family for years, I didn’t want to turn down that opportunity.

“I’ve gone on to build stronger roots now so this is my focus and I’m settled where I am.”

Harrison has become a key piece of the Wolves roster during her time at the club with their best season coming in 2018-19 when they reached the playoffs for the first time.

Last season’s shortened league campaign saw Harrison put up just shy of 10 points per game along with 3.4 rebounds and 1.4 assists per game in 16 appearances.

“Every season since I’ve played in the WBBL, my numbers have gone up, I’ve developed my game and found the way I want to play.

“I’m more confident in the way that I play and that’s something that I didn’t have in America.”

Harrison and Oaklands will have to wait that little bit longer before their competitive return to the court having had their Cup campaign wiped out followed by the delay to their league campaign.

“2020 has been really tough,” she adds. “It’s been so frustrating being ready to go and putting all the prep in and then all of a sudden, it’s not happening.

“It’s been mentally hard and we’ve tried to stay on the floor as much as we can to stick together.”

Oaklands have retained the majority of last season’s roster with a mix of youth and experience, whilst bringing in exciting talent in Amari Carter out of Arizona and Merissa Quick, formerly of Cardiff Met Archers.

“It’s really important for us to have a strong core of returners to carry the ethos and pass that onto the newbies as well,” she said.

“Amari is going to be on a lot of highlight reels – I’m excited to watch her play. She’s the most chilled basketball player I’ve ever played with and we know we can put the ball in her hands.

“Merissa is a legit offensive threat at the 5, that is something we’ve been missing. She has a strong vocal presence, too, and has been helping Louise (Rouse) and Kata (Fulop) in that role.

On supporting the emerging talent, Harrison adds: “I just try to lead by example. Always talking to the younger players and helping as much as I can.

“Lee (Ryan) is an amazing teacher and really breaks everything down, but it’s a team thing to embrace the young ones.”

Oaklands will be hoping to make a splash this season, while Harrison aims to make an impact both on-and-off the court.