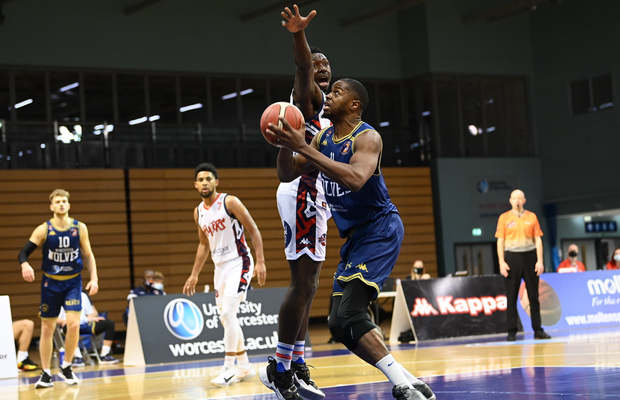 The fourth edition of our 2020-21 BBL Power Rankings comes a little later this week (normal service will resume next Monday) so we could incorporate the mid-week Cup game and look ahead to the start of the regular season.

Eight quarter-finalists are now known with just one game still left to play in the group phase of the Cup.

It’s still incredibly early, so there is a bit of balance between rewarding victories so far and making longer term predictions in the league.

You have to give Plymouth credit. Five wins from six in a busy schedule, and while they’ve not been convincing in every game, they have found a way to win. Missing international quality in Andrew Lawrence, the Raiders also had to make do without GB Senior Ashley Hamilton this past week and ground out a two-point win in Worcester, with Denzel Ubiaro stepping up.

Paul James scooped the BBL’s Coach of the Month award – dedicated to the late, great Kevin Cadle – with more wins than any other team in the league so far. They’ll come up against familiar opposition to start their league campaign with another visit to the University of Worcester Arena, on Friday night before hosting Newcastle on Sunday in what promises to be an intriguing encounter.

Not in action this week, so an unfortunate drop, but the Riders were still in the news as they moved to deal with season-ending injuries to Mo Walker and Raheem May-Thompson with the signing of Ali Fraser (hat tip to the social teaser).

The Scot should be a good fit in the Midlands and provides much-needed presence inside to partner Darien Nelson-Henry in the front-court. Leicester still have top spot to secure in the Cup, if they can beat Sheffield on Monday night, but first open up in the league as they head South to face Surrey Scorchers on Saturday – and they have a pretty decent record in recent history..

Who's ready for the league campaign to get underway this weekend?

The first weekend off for the Lions having already completed their group campaign in the Cup has allowed them to prepare for the start of the BBL Championship. Technically, the defending champions – with no winner crowned earlier this year – and expectations will be high despite a stuttering start to the campaign.

DeAndre Liggins had a couple of huge games at the Copper Box, while Justin Robinson will be key to the team’s success and the Lions open up in the North-East as they face Newcastle as part of the Sky Sports double-header.

Job done. Newcastle booked their place in the next round as they overcame Sheffield on the road to avoid a nervous wait for the Sharks’ final game. Rahmon Fletcher is playing at an elite level once again and led the way in the 13-point victory with 24 points and 11 assists for another double-double.

Back-court partner Cortez Edwards also posted a double-double in the win, and the Eagles come up against the Lions in the league with the two teams both winning on the road when they met in the Cup. The Eagles then face Plymouth on Sunday before finding out their quarter-final opponents in the Cup the following evening.

The Giants are quickly finding their stride. Confidence is high as they backed up a 42-point win at home to Cheshire by beating Glasgow by 37 on Friday night behind 20 points each from Lyle Hexom and Breaon Brady.

With top spot all but secured, Manchester then suffered their first loss as they went down by 10 at the Emirates Arena two days later. The big challenge now is how they fare against the rest of the league. They certainly look a playoff team at the very least, but the league looks strong this season – they start away at Bristol before another home clash with Glasgow follows.

From 0-3 to a place in the quarter-finals. Sure, the Flyers needed results to go their way this past week, but when it came to taking care of business themselves – they did, even if it was only just. Needing a six-point victory, Eric Lockett’s late basket was enough to secure a seven-point win on the road in a repeat of last year’s Cup final (which now feels at least three years old).

GB international Teddy Okereafor has provided an assured influence at the point guard position in the absence of the injured Josh Wilcher. Bristol turn their focus to the league this weekend as we get a better idea of where teams are in comparison, and they have a double-header with Manchester and Cheshire to contend with.

The defending Cup champions had three opportunities to wrap up a spot in the quarter-finals this past week, and saw their reign eventually end in the dying seconds on Wednesday night. Three tough defeats, by a combined margin of just 13 points, for a team still without their American contingent.

Worcester led heading into the fourth quarter in defeats against Plymouth and Surrey – with Matthew Bryan-Amaning putting up 26 points against his former side – before finding themselves trailing by as many as 18 points in the decisive clash with the Flyers. Matt Newby’s side battled back, but it was not enough as they bow out of the Cup by a single basket in the head-to-head stakes with Bristol.

They still await reinforcements and the Wolves have the potential to be a top-four team this season with valuable minutes for their current group, and they open up league play at home to Plymouth on Friday.

4 key pieces missing from the only team in the league that is without its full squad (that being said teams will make changes). Bar 1 game in the group we were in every game including injuries…. I like this group shows heart when fatigue sets in… that being said no excuses!!

The Scorchers had to wait until their sixth game of the season to get their first win on the court as they edged out Worcester by four points on Saturday. Tayo Ogedengbe and Connor Cashaw shared 36 points between them with Surrey already having their last eight spot booked prior to their final game.

Something to build upon for the Guildford-based side and the squad received a further boost with the confirmed return of Ryan Richards this week with the former NBA Draft pick set to make his debut in the league opener this weekend.

Their form at Surrey Sports Park was not an issue last season, and the Scorchers will hope to continue to enjoy home comforts as Leicester Riders make a visit, before heading on the road Sheffield.

Gareth Murray no longer has a 100% record in his young coaching career with the Rocks, but will definitely take three wins from four to start the campaign. It was somewhat of a reality check on Friday night as they were beaten by 37 in Manchester, but showed great character to bounce back a couple of days later to beat the same opposition by 10.

The Rocks may still come to struggle in the league, but have already shown they will not be pushovers with a young core stepping up and experienced players such as Jonny Bunyan leading the way, with the Scot netting 20 points in Sunday’s home win.

One win apiece in the Cup double-header last weekend, how about another clash to get things going in the league?

It has to be said, it would be a big surprise if Sheffield were the second worst team this season, but it’s difficult to put them any higher when teams are currently winning around them. Four straight defeats, admittedly against tough opposition, have seen the Sharks bow out of the Cup with one game still to play as their latest 13-point reverse against Newcastle sealed their fate.

Atiba Lyons has made a change this week with Mackey McKnight replaced by compatriot Jeremy Hemsley in a bid to change their fortunes. Sheffield have a chance to get back on track at the perfect time as they face Cheshire on neutral ground to open up the BBL Championship regular season, and also host Surrey on Sunday.

Having already replaced Devin Mitchell with Mike McCall, the Phoenix made another change this week as Eric Hamilton made way for incoming big man Jimbo Lull.

The nightmare Cup campaign can be put behind them with key players back in time to start the regular season, LIVE on Sky Sports, against Sheffield, tonight before welcoming Bristol Flyers on Sunday.