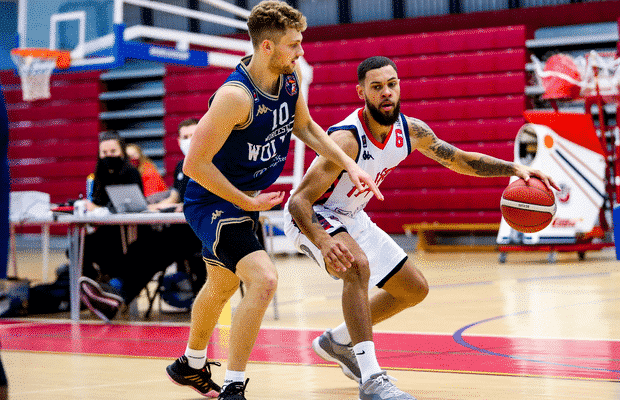 The busiest week of the season so far saw 10 games take place across six days as the BBL Cup group phase continued.

Manchester Giants and Glasgow Rocks are the only unbeaten teams remaining and are two of five teams already qualified for the quarter-finals in the Cup.

After three straight victories, the Riders saw their streak ended on the road against London Lions. Despite being down by as many as 17, they pulled themselves back in contention before coming up short as all five starters reached double figures with Geno Crandall continuing to prove to be one to watch around the league.

The Riders’ usual depth was lacking having announced that both Mo Walker and Raheem May-Thompson are expected to miss the rest of the season – so expect to see some reinforcements soon, ahead of the start of their league campaign in early December.

There’s probably a strong case for Plymouth to sit at the top of these rankings. No team has more wins, for starters, and they are still without a key player in Andrew Lawrence. And, while they enjoyed a second 36-point home win of the season as part of a weekend double over Surrey, there would have been disappointment in the manner of loss at home to Bristol as they were held to 65 points.

How would Plymouth have fared in the apparent ‘Group of Death’? There’s no way of knowing. But we do have the regular season starting soon as the schedule reverts back to teams playing each other three times, which reduces the emphasis on late baskets seen last season with head-to-head ramifications in mind.

No need to worry about the Lions being in our top four with a losing record this week as they put together back-to-back performances for the first time, and became the first team to advance from the ‘Group of Death’ despite currently sitting third (see Dan Routledge’s explanation as to why).

Justin Robinson put in his best scoring display with 23 points as the Lions were dominant late on to wrap up an emphatic win away at the Eagles before completing a perfect double-header to see off the Riders by 11 at the Copper Box. DeAndre Liggins is fast making himself at home at the Stratford venue and dropped another 26 points to lead the way.

Newcastle always looked in control against Sheffield on Tuesday even if the eventual 10-point margin doesn’t necessarily reflect that. Rahmon Fletcher starred with 25 points and 12 assists, while Evan Maxwell posted his own double-double, though GB newcomer Rex Pflueger’s night was cut short due to injury.

The Eagles were looking for back-to-back home wins three days later, but were blown away in the second half by a hungry Lions side with the 20-point defeat meaning their place in the quarter-finals is not guaranteed just yet. The reverse fixture against the Sharks will prove decisive and they won’t want to rely on a Leicester victory to get through.

Worcester are still without their American contingent, but still came away with a five-point victory over Bristol at the weekend which is a good sign of things to come. Dutch captain Maarten Bouwknecht led the way with 21 points and six assists with Jordan Williams impressing again with a double-double.

The Wolves are not quite through, just yet, and still have three games to play over the coming week with more to expected of Matt Newby’s side once they get to full strength, though it will be pleasing to see the current group step up to the mark.

The incoming crop of imports at the Giants certainly had the big build-up in the summer, and they certainly have wasted little time making an impact. Wednesday saw the first BBL action for three of their Americans as they ran riot for a crushing 42-point victory over their depleted rivals, Cheshire.

Lyle Hexom posted a double-double, Sam Cassell fired in 25 points and Breaon Brady had 16 points on 8-of-11 shooting, while they also had a combined 37 points from opening game heroes Alex Ouandie and Jordan Whelan.

From zero wins last season to back-to-back triumphs and an early spot in the quarter-finals already secured. Onto an intriguing double-header with the Rocks with top spot to be decided.

Three straight defeats and the Sharks are looking likely to be the side that misses out from the ‘Group of Death’. They poured in 58 second-half points against the Eagles, which proved too little, too late and there was no such late reprieve on the scoreboard at home to the Riders on the Friday as they went down by 21 points.

Mathematically, they still have a chance. It’s just beating Newcastle and Leicester may prove difficult enough without having to win by a certain amount, too. Even so, it’s two more games under your belt with the chance to take something into the league campaign that begins with a home double-header for Atiba Lyons’ side.

Gareth Murray still has a 100% record in his young coaching career with the Rocks. Sure, it wasn’t as convincing as the first meeting, but it didn’t need to be and the Glasgow will have a quarter-final to look forward to.

Julius Van Sauers and Marc Kwedi both netted 19 points apiece with Fraser Malcolm adding 17 points in the 13-point road success with the Rocks first looking ahead to a double-header with Manchester as top spot in the group is up for grabs.

It was a bit of a roller-coaster week for the Flyers. They announced that Josh Wilcher would be out for 4-6 weeks through injury, then announced the short-term signing of GB international Teddy Okereafor. They then beat Plymouth on their rivals’ home court before ending the week with defeat at home to Worcester with an early exit in the Cup looming.

Eric Lockett poured in 25 points against the Raiders as they ground out a maiden victory, but any momentum was immediately halted as the Wolves came out on top in a game of four quarters (28-9, 4-20, 22-9, 10-23). The Flyers still have a chance to progress, but their fate could be sealed by the time they return to the court at the start of December.

The Scorchers have advanced to the quarter-finals of the Cup, without *actually* winning a game. This week saw back-to-back defeats against Plymouth, though they still go through as a result of the two forfeited victories against Bristol.

A strong start at home could not be built upon as the Scorchers saw a double-digit lead turn into a double-digit defeat before a third quarter collapse on the road saw them plummet to a 36-point loss. 3/20 and 4/18 shooting nights from 3-point range are poor returns for a team full of perimeter threats, but they’ll be fun to watch once they start clicking.

The 2018 Cup champs will go no further in this year’s competition with Ben Thomas’ side still without a win. Cheshire brought in ex-Manchester guard Mike McCall, while Jalen Hayes returned, though they were still depleted for the second week running.

Cheshire were blown away by 42 points in their second derby clash with the Giants before a spirited effort saw them beaten by 13 at home to Glasgow with McCall netting 23 points in a full 40-minute display, while Sol Rolls-Tyson posted a double-double.

Their absent players are reported to be returning to training this week with Phoenix now averting their focus on the start of the league campaign with an opener against Sheffield as part of the double-header live on Sky Sports.

Related ItemsBBL 2020-21BBL Power RankingsPower Rankings
← Previous Story Who can still advance in the 2020-21 BBL Cup?
Next Story → From Hackney to lockdown defender in the ACC – with Olu Babalola – Ep. 82