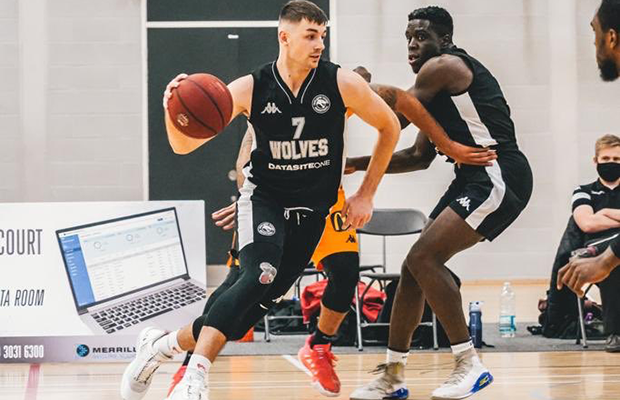 Surrey Scorchers have moved quickly to secure the services of 22-year-old rookie Evan Walshe after his early impressive performances in the L Lynch Trophy with Oaklands.

The 6’4 former GB U20 international and Hoopsfix All-Star Classic alumnus joins Creon Raftopoulos’ side having just graduated from Barry University in Florida, and recording 33 points at the weekend against Hemel Storm.

“It’s exciting times, I’m really pleased to be here down in Guildford with the team,” the shooting guard said.

“Its great to get back on the floor, after a long Coronavirus summer its been good to be playing for Oaklands.

“It’s a family atmosphere here – I was lucky enough to come down here during the summer for a couple of training sessions during the Scorchers bubble.

“The guys have been very welcoming and invited me in with open arms.

“Scorchers fans, I’m never going to step out on to the floor without giving 100 per cent, I’m all heart so hopefully you can see that soon.”

In his senior year, he average 8.6 points per game shooting an impressive 40.6% from the
three-point line.

Head Coach Creon Raftopoulos added: “I’m ecstatic to get this deal over the line.

“I spoke to Evan earlier in the summer and now things have fallen into place to make this happen.

“One of the most exciting parts about it is that I’ve always been about giving young British players an opportunity to show what they can do.

“One of the key things about his 33 point performance last weekend is that Levi Noel is an outstanding BBL defender, and Evan managing to play well against him really caught my eye.

“He did really well in college, and I’ve got to thank Oaklands for allowing him to switch to us and for all of the hard work they have put into him as a player.

“I think Evan has shown his ability to shoot the basketball and he’s a very good on-ball defender – there’s a lot of plusses he brings to the table.

“I think he could become a GB senior player if the chips fall right for him.”