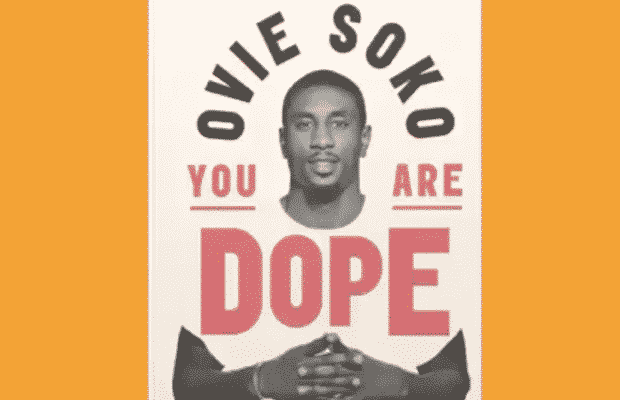 Ovie Soko’s first published self-help book ‘You Are Dope‘ will be officially released this week.

The GB Senior international gained widespread public fame after his appearance on ITV’s reality TV show ‘Love Island’ in the summer of 2019.

LESS THAN A WEEK OUT, AND HERE YOU HAVE IT, the final cover. This bookwas one of the most exciting projects I’ve had the chance to work on over the last year, was such a great experience making something of substance to GIVE BACK. I think there is something that everyone can take away from the read to help them on their life journey. Have a dope day people 🙌🏿❤️🙏🏿😊😀😃😁😆

And, now Soko has turned to creating a self-help book with publishers Quadrille which he describes as his ‘most exciting project’.

Whatever’s happened before is in the past. Just do your thing.

Don’t fight yourself, because that will make you more frustrated than anything

At the end of the day, it’s the small gestures that speak the loudest

Ovie Soko won hearts all over the world during his time on Love Island UK with his openness and wise insights. Now, he has a message for everyone:

You, yes, YOU, are exactly where you’re meant to be right now. You’re ready for what life is going to throw at you and you’re ready to embrace life in all of its glorious complications.

This book will help you find your way to peace and teach you to cherish the small moments that are a part of our big lives. Most importantly, it will show you how to love who you are right now and embrace who you are going to be.

Publishing director Sarah Lavelle said: “Ovie possesses a wit, wisdom and warmth beyond his years, and we’re looking forward to working with him to spread his positive message far and wide. You Are Dope is going to be beautiful and inspiring – a unique book from an important new voice.”

Soko stayed in the UK for the 2019-20 season with BBL champions London Lions, which enabled him to capitalise on work outside of the sport, including a partnership with ASOS, whilst also working with Sky Sports as part of their NBA coverage.

The 29-year-old forward continues to feature in the ‘HeatCheck’ episodes and is currently playing in France with top-flight side Le Mans.

You can order ‘You Are Dope’ from Amazon, or get it in all good bookshops from Thursday, October 1st, 2020.