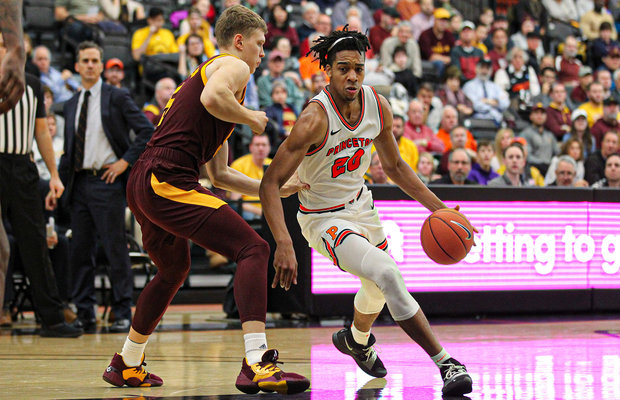 The 2019-20 college season is up and running and we recap November’s action by checking on the top Brits flying the flag stateside.

Boban Jacdonmi started the season on fire with 29 points on 12-16 shooting and 10 rebounds for a career night to help Southern Mississippi (2-6) to an opening win before adding 18 points in his next outing with a streak of five games in double figures.

“He’s a player that has not experienced a lot of personal success, but he plays his tail off every single day,” Ladner said of Jacdonmi. “I was so glad to see him have such a big night. I thought he made a great move to start the game with a left-handed jump hook, and hopefully this will be a confidence-booster for him, especially with our lack of seniority on the team.”

The redshirt senior had totalled 30 points and 38 rebounds in the whole of the 2018-19 season, and is already averaging 12.4 points per game alongside 6.4 rebounds.

He finished with 29 tonight in #USM‘s season opening win over Delta State.

Akwasi Yeboah is averaging 9.0 points per game as a Graduate Student at Rutgers (6-1) with four games in double figures in his role off the bench. His best of 14 points came in just 17 minutes in a convincing 86-39 win over Niagara.

Sophomore forward Jubrile Belo is putting up 11.8 points and 5.0 rebounds per game as a regular starter at Montana State with five scores in double figures including a season-high of 17 on 7 of 8 shooting along with three blocks against Grand Canyon. Fellow BA alum Amin Adamu is also part of the starting lineup and had 13 points in a recent loss against Green Bay with the duo helping their side go 3-0 in the Spartan Invitational during November.

Amin with a SWEET pass to Jubrile and we’ve got the lead after a 6-0 run! #GoCatsGo pic.twitter.com/0hqUwEZnfE

Caleb Fuller had run of three games as a starter for UC Davis (2-7) in the Red Wolves Classic with double-figure scoring in each game, sparked by a career-high 18 points in a 65-64 triumph over Idaho. In the same game, freshman Ade Adebayo – Underclassmen MVP at the 2018 Hoopsfix All-Star Classic – was trusted with his defence late on and is currently averaging just over 10 minutes per game.

“I cannot say enough about the contributions from the young guys. Ade’s length did not allow a good shooter to get a look.. Caleb kept us in the game with his offense, and made some big plays down the stretch and came up with some huge rebounds.”

Here is the final play of the game, with ⁦@UCDavisMBB⁩ leading by one. Ade Adebayo’s OUTSTANDING defense prevents Idaho from even attempting a shot at the buzzer. #GoAgs pic.twitter.com/khguTumYYS

Freshman Mate Okros – Class of 2019 MVP at the 2019 Hoopsfix All-Star Classic – has been a regular starter for Drexel, coming up against Akin in that recent defeat with his season best of 11 points coming in his second outing before matching that tally in an 86-74 win over Bryant. 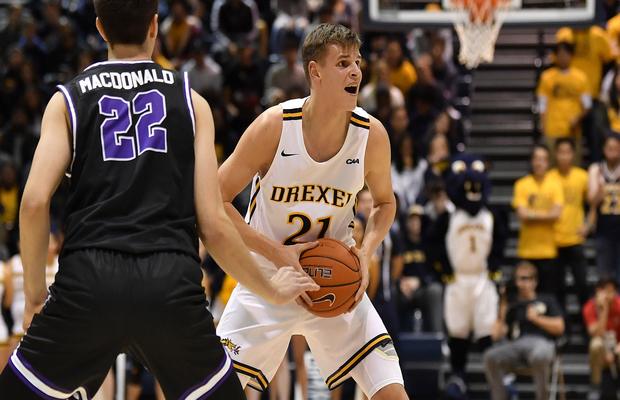 Tosan Evbuomwan has earned his opportunity at Princeton having seen limited playing time in the first three games for Princeton (1-5) before being inserted into the starting lineup. He scored 10 points at Indiana and hit double figures again to go with eight rebounds as the Tigers ended their losing run by beating Bucknell 87-77 on the road.

Kayne Henry fired in 19 points in an emphatic 125-55 win for Jacksonville State (2-4) as the school broke its single-game scoring record as a team – with the GB Under-20 wing earning a first start in the following game.

Italian-born Micheal Anumba has started first five games for Winthrop (4-4) with 10 points in a narrow loss against ETSU before coming off the bench to score nine points without a miss in an 83-70 loss against Duke.

Zion Tordoff – Under-17 MVP at the 2016 Hoopsfix All-Star Classic – put up 14 points and seven rebounds in a 58-56 success for Marist (1-4) on opening night, earning a first start in their next outing with seven points and seven rebounds. Fellow junior Shaquille Walters has started six games for Northeastern (4-4) with a season-high of nine points on two occasions, whilst posting eight points and eight rebounds in a recent win over Weber State.

Tariq Balogun netted 13 points with five rebounds in his first appearance for Eastern Kentucky University (3-4) in crushing Ohio Chillicothe, 129-43. The freshman also came up with this gem via the school’s official website:

Q: If you won the lottery, what would you do with the money?
A: I’d take the mandem to Harrods.

Sam Japhet-Mathias redshirted last season after his transfer from Wake Forest and had a season-high of 10 points in 26 minutes of his first start for San Jose State (3-4) to end the month in a tough loss against Oregon State.

Aaron Menzies is also back in action after an injury disrupted 2018-19 season – making his first and only start with nine points and seven rebounds in a 107-56 win as Saint Gaels (7-1) make a strong start. Freshman Hosana Kitenge is seeing 7.2 minutes per game on court at Coastal Carolina (4-4), recording eight points and three boards against Middle Tennessee.

Gedi Juozapaitis – Under-17 MVP at the 2015 Hoopsfix All-Star Classic – hit the ground running with 26 points and 12 rebounds in an opening 84-66 victory for Flagler College (3-3). However, the best was yet to come after exploding for 35 points – to match his career-high – with 9 of 13 shooting from 3-point range to tie the school record.

The sophomore wing is averaging 16.8 points and 7.8 rebounds per game having started every game so far for the Saints with a further 21 points coming in a 17-point win against Tampa.

Sesan Russell has also started the season in sensational form at Florida Tech (4-3) with impressive averages of 22.3 points per game along with 4.1 rebounds and 3.1 assists. The sophomore guard has posted 20-point games in all but one game so far – opening with a career-high of 29 points including 26 in the second half.

The former Loughborough guard nearly matched his new high after recording 28 points along with eight assists in a dominant 40-point win against Johnson with freshman Niall Harris producing his best display with 14 points, 11 rebounds and six assists off the bench, while Harry Craik makes it a third Brit on the roster in his senior year. 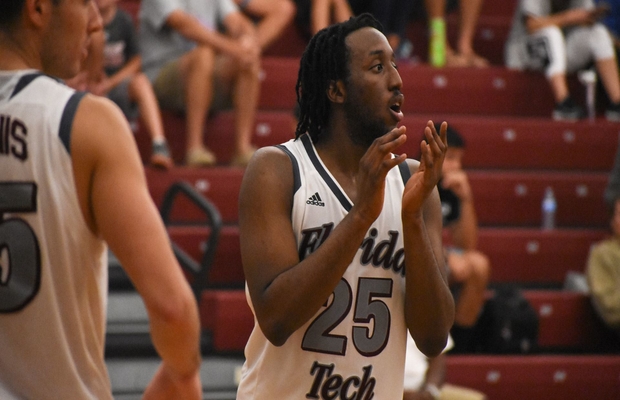 Josh Apple is averaging 10 boards per game for East Central (5-1) having started the season with a double-double of 13 points and 10 rebounds. The junior forward then set career highs in points and rebounds with a 14-point, 16-rebound double-double in an 73-81 road victory.

Junior guard Jelani Watson-Gayle opened the season with back-to-back 20+ point games for Miles College (5-1) and closed out the month with a season-high effort of 24 points off the bench to lead his side past Benedict.

Danny Evans has helped Saint Anselm (5-1) off to a strong start by hitting double figures in scoring in every game so far. The senior guard ended November on a high with a career-best of 21 points in a 93-104 overtime success along with nine rebounds having also handed out a best of nine assists earlier in the month.

Senior guard Andre Arissol is putting up 15 points per game at Chaminade (2-3), boosted by a career-high 24 points – including six three-pointers – in a tough loss against Georgia to end the month. He previously recorded 14 points and six assists to help his side to their second win before netting a team-high 18 points against a strong Kansas side.

77-all, 9 sec left for Georgia pic.twitter.com/QrTTciBbd7

Evan Walshe netted a season-high of 20 points off the bench for Barry (4-2) as they dropped their conference opener against Florida Southern with the senior guard adding six rebounds having also hit double figures in two other encounters.

Redshirt freshman Sean Nealon-Lino has started every game for Fresno Pacific (2-4) with a season-high of 15 points against Cal State LA, while Jonathan Brown is averaging 9.2 points per game in his freshman year – also netting a best of 15 points having started four games so far. Sophomore Alex Ferguson completes another British trio and has hit his only 3-point attempt on two occasions for the Sunbirds.

Callan Low hit double figures for the first time for Newberry College (4-2) with 11 points in a big 98-65 victory with fellow freshman Robin Bedford opening his account with a triple to mark his first appearance.

Adria Amabilino-Perez finished the month with back-to-back 12-point games for Bentley (5-1) amongst their strong start, while Arminas Griska reached double figures with 10 points along with eight rebounds in his first start at Ohio Valley (2-5).

Romario Spence also ended November in double figures in consecutive games for the first time at University of Montevallo (5-3) having been inserted into the starting lineup for both of those games.

See HERE for the ultimate list of players in US colleges in the 2019-20 season.