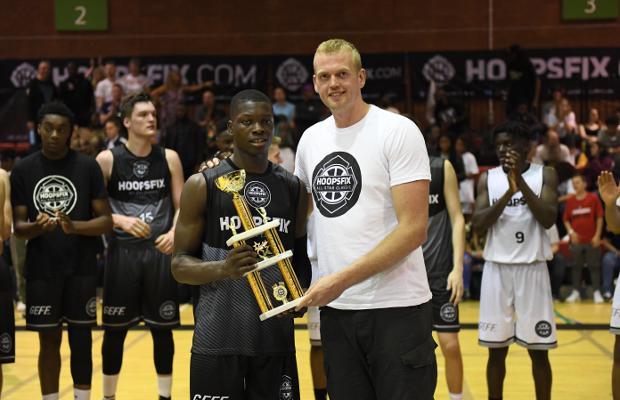 Ade Adebayo described winning MVP in the Underclassmen game at the 2018 Hoopsfix All-Star Classic as a ‘humbling moment’.

The Barking Abbey guard earned the accolade – presented by GB’s Dan Clark – after finishing with a team-high 15 points in Team Black’s 85-71 victory, on Saturday.

“It’s a great feeling to win MVP after working hard – it’s a humbling moment,” he declared.

“I didn’t think I was at my best today, but I played for the team and did the things to help us get the win.

“Everyone came together really well – even when we were down, we stayed together and just looked to do the things we were doing well and that helped us in the end.”

Adebayo was competing in the Hoopsfix All-Star Classic for the first time and relished playing in front of a sellout crowd at the Brixton Recreation Centre.

“I really enjoyed it,” he said. “It was a really fun atmosphere and great to be part of.

“It means a lot to have been highlighted as one of the top performers in my age group in the country.”

Check out highlights of Adebayo’s performance and the rest of the action from the 2018 Hoopsfix All-Star Classic with highlights on FreeSports TV tomorrow (Tuesday) night at 9pm.