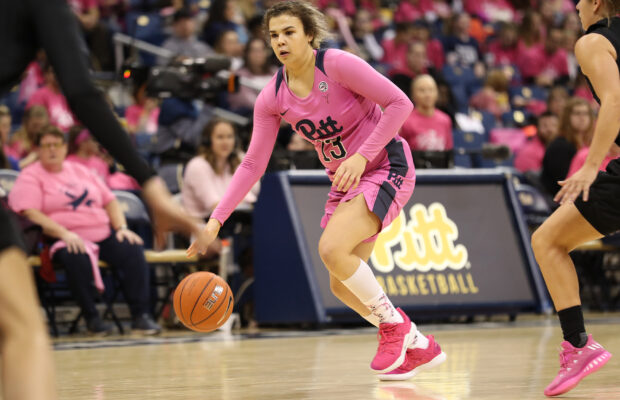 Kyla Nelson has returned to action on the court for Pitt after recovering from cancer surgery before the start of the 2019-20 season.

The former GB Under-20 guard commenced her junior year with three points and two assists in 12 minutes as the Panthers fell to a 71-80 loss at home to Miami University – fellow Brit Monique Esbrand had 11 points in the win.

"The fact that I'm already out on the floor is a blessing to me and I just feel really lucky." @kylanelson_ on her return to @Pitt_WBB after cancer treatment 🤩 pic.twitter.com/8YArZzc1Hy

It’s been a crazy September! Grateful to have so many amazing people in my corner. Ready to take on this next challenge so I can fully focus on the season ahead #H2P @Pitt_WBB https://t.co/1I8ScCyvg4 pic.twitter.com/j660O5FR9z

Nelson played 60 games through her first two seasons with Pitt with 17 starts, whilst amassing 300+ points, 100+ rebounds and 50+ assists in 19+ minutes per game.

The 22-year-old revealed the diagnosis of a tumour of the apendix in September and received support flooding in from around the world including the British Basketball community.

Wow. I am just completely overwhelmed by the love and support I have received! Thank you! I also have to turn my attention to the fact that it is THE FIRST DAY OF OFFICIAL PRACTICE. Fortunate to have these girls by my side. This team is so special. #H2P @Pitt_WBB pic.twitter.com/xmO7AaBIGN

Special shoutout to @sportsiren for stopping by the locker room before Kyla made her return.#H2P // #GoBeyond pic.twitter.com/y0qwZPiL6L