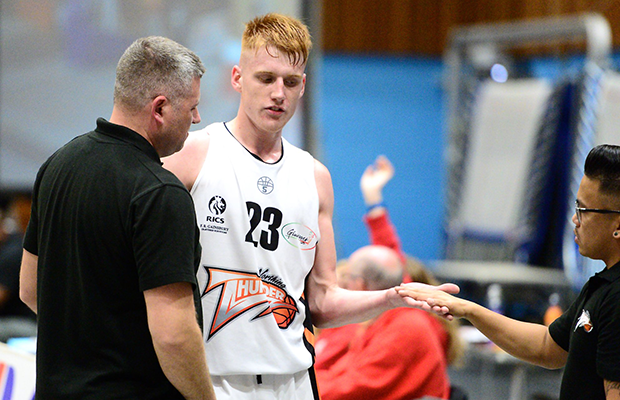 The 2019-20 NBL season got underway at the weekend including a six-game slate of Division 1 action on Saturday.

Team Solent Kestrels opened their campaign with a dominant 122-61 success at home to Essex & Herts Leopards. American duo Travis Charles and Ian Smith shared 52 points with Elliott Sentance adding 23. The hosts racked up 62 points in the first half as they established a 24-point advantage and powered further clear in the second half to enjoy a huge winning margin.

“Our club and the Kestrels family have been looking forward to our first home league game in our brand new facility and the guys did not disappoint the fans,” said head coach Matt Guymon.

“It was a fantastic turn out from our supporters and we hope to continue to build on that for each game. I thought the group put in a solid performance at this early stage of the season – we are playing unselfish basketball at a high tempo, but we need to continue to focus on how we guard the 3-point line and the oppositions key personnel.

“That said, I’m really excited with the potential we have shown so far.”

GB Under-18 guard Cam Hildreth produced a 30-point haul off the bench to help lead Worthing Thunder to a 103-75 win over Barking Abbey. Hildreth went 9 of 10 from the line to lead all scorers as the hosts also benefited from experience as Zaire Taylor added 25 points, while Alex Owumi netted five triples in his 22 point display along with 11 rebounds.

BA only trailed by three points at the end of the opening period, but conceded 36 points in the second as the game slipped away. They were led by another junior international – and fellow HASC alumni – as Louis Norton top scored on a youthful roster with 25 points and collected nine boards.

Derby Trailblazers survived a fourth quarter fightback from Leicester Warriors as Malcolm Smith split a pair of free throws to hand his side a 91-90 triumph. The decisive point took the American’s tally to 35 points, whilst adding 11 rebounds with captain Oli Stanley also contributing a double-double with 18 points and 12 rebounds.

TJ Henderson fired in 29 points for the visitors with his first triple in nine attempts tying the game at 90-90 inside the final minute, though his side came up short despite rallying from a 16-point deficit.

Elsewhere
Sam Newman came up with a triple-double on debut for Hemel Storm after putting up 12 points, 14 rebounds and 11 assists in their convincing 69-103 win at Liverpool. Lee Hodges top scored with 19 points and added 11 boards as six players hit double figures in the win.

Westminster Warriors edged out Reading Rockets in an 87-84 victory with Jon J Johnson leading the way for his side with 22 points, 10 rebounds and five steals. Meanwhile, Liam Davis – on loan from BBL side Bristol Flyers – scored a game-high 27 points as the Rockets missed out on the road scalp to open the season.

Also, Thames Valley Cavaliers were paced by Martelle McLemore’s 29 points as they enjoyed an opening 82-78 win against Bradford Dragons. The visitors recovered from a 28-13 deficit after 10 minutes to lead heading into the final period, but the Cavaliers finished strong to take the victory.