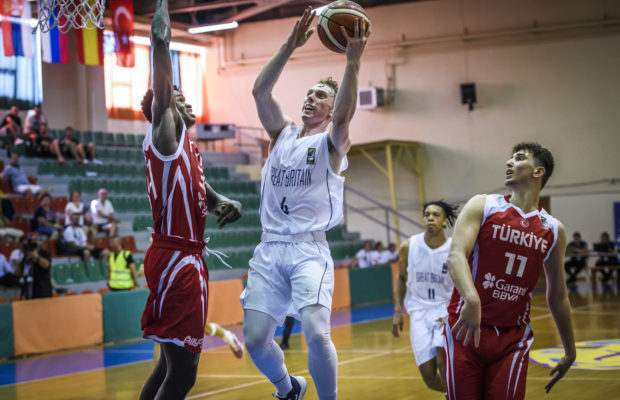 Great Britain Under-18s suffered a heavy 61-102 defeat against a strong Turkey side in their European Championships opener in Volos, Greece, on Saturday afternoon.

From 8-8 in the first, their opponents broke clear for a convincing victory with GB looking to bounce back when they face Serbia tomorrow.

Tomiwa Sulaiman – who scored 26 points in an opening victory last summer – led the way with 10 points, seven rebounds as well as five steals, while Chris Feeney also had 10 and Josh Uduje scored nine.

David Chive opened the scoring from behind the arc with GB up 5-2 early on before Turkey went on a 12-2 run that included five points off turnovers.

Amari Williams scored with his first touch off the bench – to snap a four-minute drought – out of a time-out, but GB would trail 12-22 at the end of the opening period after a 4 of 14 start from the field combined with seven turnovers.

Turkey’s interior defence prevented easy scores for GB and their outside shooting saw the gap balloon to 20 points in a 11-1 opening to the second. Mate Okros hit a three near the midpoint of the period – GB’s first field goal in eight attempts having also missed nine consecutive 3-point attempts since Chive’s opening score.

GB’s woes were compounded when Okros and Sam Grant both went down to painful injuries in the final minute of the half as Alan Keane’s side went into the locker rooms down 23-47 after Sulaiman’s late and-1 conversion.

Feeney scored 10 points in the third – including two triples – as GB made a competitive start with their highest scoring quarter of the game. However, a 9-0 burst from Turkey took the lead beyond 30 points and they had a 44-75 cushion heading into the final 10 minutes.

Turkey continued to stretch their advantage – despite multiple missed dunks – with a convincing victory wrapped up in a challenging start for GB. Like with the Under-20s, they are assured of a place in the Round of 16 whatever happens in the group phase and the goal will be continuing to improve in each game with Serbia and Germany to come.