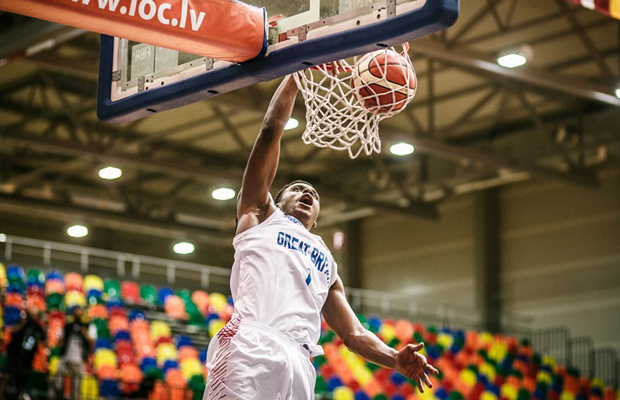 Great Britain Under-18s picked up a huge 87-78 win over Montenegro to open up their Division A European Championship campaign on Saturday afternoon in Latvia.

Tomiwa Sulaiman exploded for 26 points, 9 rebounds, 5 assists, 6 steals and a block on 13-of-18 shooting to finish with a 40 efficiency rating. Kareem Queeley had some huge baskets down the stretch for his 19 points and 6 assists, whilst Mate Okros joined them in double figures with 11 points.

Sulaiman AGAIN! He now has 24 and we're not even halfway through the third 👀🇬🇧 #FIBAU18Europe pic.twitter.com/ma7hgztGO0

“Exactly the start we wanted to the tournament,” Head Coach Alan Keane commented. “Division A is a different beast, every team is capable to beat anyone. We showed we fit right in. However, in tournament play you must get better each day and move on regardless of previous performances. Our only focus is to be better than yesterday and keep building.”

GB stamped their authority on the game early, causing trouble for Montenegro with their press, whilst getting out in transition for baskets, as they finished with 30 fast break points.

Sulaiman got them going from the opening tip, having 18 of his 26 before the halftime break, and carried that momentum into the second half, with another 8 points in the first three minutes of the third, before other players began to step up.

As Montenegro pulled within two heading into the final 5 minutes, Queeley hit a tough 3-point play, before then knocking down a triple from the corner to give GB a six point cushion and that is as close as Montenegro would get the rest of the way.