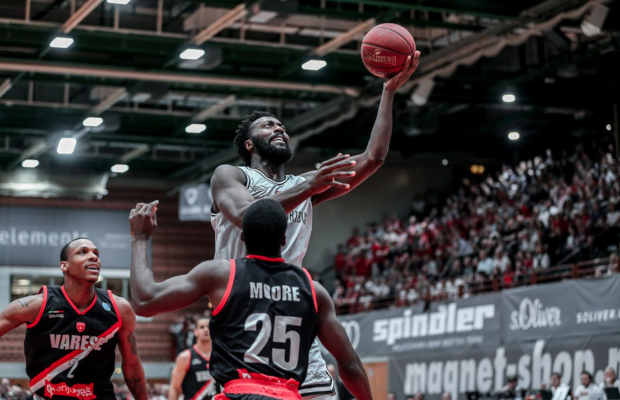 Gabe Olaseni is heading into the FIBA Europe Cup final after helping s.Oliver Wurzburg complete an aggregate victory over Varese in the last four.

The GB international posted 12 points and seven rebounds in his side’s 89-86 second leg victory which secured an overall 178-152 triumph on aggregate.

The German side did the damage on the road in the first leg last Wednesday with Olaseni scoring six points in 18 minutes of the dominant 66-89 success.

Olaseni and Wurzburg had overcome Ryan Martin’s Bakken Bears in the quarter-finals and now advance to a title showdown with another Italian side in Dinamo Sassari – who were pushed close by Leicester Riders back in their group opener.

The 2019 final is a two-legged contest with the first leg in Sassari on 24 April before the return leg takes place in Wurzburg the following week on 1 May.