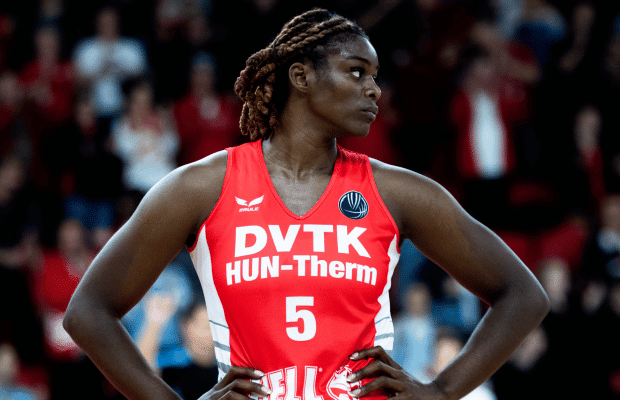 The 2022-23 season is already underway with plenty of British representation in the various European competitions.

There is a first British men’s team in EuroCup action in over a decade, while the all-conquering WBBL champions are back for another European run with several players also flying the flag in Europe.

One of GB’s greatest is back for another season with Turkish side Mersin after helping the team to the Final Four in EuroCup Women action last season. It marked a second successive trip to that stage of the competition for Fagbenle having been a runner-up in the previous season with Reyer Venezia. Mersin return to the ELW stage and have brought in former WNBA MVP Jonquel Jones.

Green was one of the top performing players in the qualifiers to help DVTK make history by reaching the regular season of EuroLeague Women for the first time. The GB forward re-signed with the Hungarian side and after previous years of playing in ECW, Green made a confident step up with 17 points in each of their two decisive victories. Their first game is away in Italy against Schio.

Olaseni is already making his presence felt in this season’s BCL having re-signed for another year in Turkey with Darussafaka. The 30-year-old is leading the team in all major categories with 17.0 points, 8.5 rebounds and 4.0 assists per game through two weeks after an impressive 20-12-7 display last week helped his team to their first win.

Yeboah makes it two GB players on the team at Darussafaka this season having made a summer switch after a year in France. The 25-year-old has 5.0 points and 4.5 rebounds per game to his name so far across two games in making a debut in the competition – linking up with compatriot Olaseni in the frontcourt.

Nikitinaite has already made a glowing start to a rookie season overseas with a SuperCup title with Elfic Fribourg in Switzerland as well as an early appearance in the Team of the Week. The former GB Under-20 could be a name to watch in upcoming Senior squads and will fly the flag in the EuroCup Women competition as Fribourg go up against Namur, Benfica and Diddeleng in Group G.

DLO won a league title in the Netherlands last season and has already tasted success in Austria with Swans Gmunden with their SuperCup triumph. The club failed to qualify for the Basketball Champions League, but their European campaign continues in FIBA Europe Cup action, though they have dropped their opening two games in the regular season at home. The GB guard leads the team with 5.0 assists per game with their next three encounters all on the road.

The Lions reached the second round of the FIBA Europe Cup last season, but have made the step up by entering EuroCup this season. They have strengthened their roster with high-level acquisitions including GB stars Ovie Soko and Luke Nelson.

Rising star Kareem Queeley is a former BCL winner with San Pablo Burgos and the Lions also have Devon Van Oostrum and Mo Soluade on their roster as well as the returning Josh Ward-Hibbert in an extensive pool of British talent. London have started 1-1 in their 18-game regular season.

Follow along by watching all of their games LIVE on BT Sport or on EuroLeague.TV.

The Lions made history last season with their debut appearance in the competition resulting in reaching the playoffs and beating the eventual champions Bourges in the first leg of the last 32 tie.

Mark Clark has retained the majority of the British core with Kennedy Leonard, Holly Winterburn, Shanice Beckford-Norton, Chantel Charles, Azania Stewart, Shequila Joseph and Paige Robinson all back alongside some exciting new additions in a bid to help propel them further this time around.

SIDENOTE: Sydney Wallace is registered with British nationality with Szekszard in EuroLeague Women.