Taylor Erupts as Scorchers Defeat Royals – BBL Round Up, Week 13 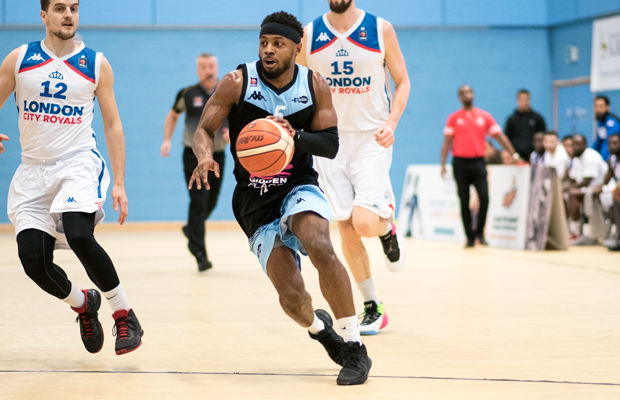 The BBL saw in the New Year this week, with a number of key performances, none bigger than Quincy Taylor’s eruption in Surrey.

Paul James’ side move above .500 with their 7-6 record, inflicting another league defeat on the Scorchers, who were unable to overcome an impressive performance from Ryan Richards. Richards had 24 of his 29 points in 16 first half minutes, but it would not be enough, as Plymouth took control in the third, behind Rashad Hassan’s 31-point, 10-rebound outing.

Josh Wilcher added eight assists with his 25 points, while Donte Nicholas had another big game for the Raiders with 19 points, 9 rebounds, along with 14 assists.

Willie Atwood added 20 and Tayo Ogedengbe had 18 for Surrey, whilst Quincy Taylor had a 16 point, 10 assist double double.

The Riders made an 11-2 start to lead by nine, but the Eagles settled and gradually took control of the contest and a late 9-2 burst capped by a Fletcher three proved decisive to seal the win.

Fletcher finished with a game-high 18 points along with 6 assists, whilst Victor Moses posted a double-double of 10 points and 11 rebounds.

Pierre Hampton and DeAndre Burnett led Leicester with 12 each.

The Eagles improve to 8-5 with a second win this season at the Morningside Arena as the Riders drop to 6-3.

The Rocks had led by as many as 13 in the contest before the Sharks battled back and it was a late three from Dirk Williams that forced an extra period that the away side would dominate to take the win.

Mike Tuck and Chris Alexander had 24 apiece to lead Sheffield, the latter adding 10 rebounds, with Dirk Williams adding 19, including the clutch three. Anthony Collins had 12 assists.

Bouna Ndiaye had 21 to lead Glasgow, with Ali Fraser having 19 and Gareth Murray 17.

An 8-2 run from London in the second period brought the score level and eventually would see out the half five points ahead. The Giants kept it close late on, but would fall to another close defeat against the league leaders.

Justin Robinson (18) and Andre Lockhart (17) together combined for 35 of London’s points with key performances, while Manchester’s Willie Clayton had a monster game with 29 points, 23 rebounds and 5 assists in a losing effort. Callum Jones had 17 and Vlatko Granic 16.

#RoyalFamily | We got the “W” | A Great way to end 2018 on what was an exciting game. Thank you to @BBLWolves and to the fans. Safe journey home and Happy New Year. 👑 pic.twitter.com/tSlgL8DGVA

The Royals pulled away late in the opening quarter to lead by seven and never looked back as they continued to extend their advantage in the second half for a comfortable win, where they shot 50% from the floor and registered 25 assists.

Matthew Bryan-Amaning starred for the Royals with a game-high 20 points along with 4 rebounds, 4 assists and 3 steals with 11 players on the scoresheet in the win, as Will Neighbour added 13 points and Elvisi Dusha joined them in double figures with 10 points, 5 rebounds and 6 assists.

The Raiders finished an unbeaten December and will host Radisson RED Glasgow Rocks in the last eight of the competition.

Plymouth held their visitors to just 10 points in the opening quarter and led by as many as 23 points in the contest before holding off a late fightback from Bristol.

Rashad Hassan led the way for the Raiders with 22 points and 9 boards, while Donte Nicholas produced his customary all-round effort with 18 points along with 6 rebounds and 7 assists.

Justin Gray’s 21 led Bristol, along with 12 from Fred Thomas.


The Giants repeated their opening night victory at the EIS to improve to 5-6 in the league, while the Sharks drop to 10-5 as they sit in second place.

The Sharks edged the opening quarter before the visitors responded to lead by three at the half, but Manchester dominated the second half as they took it 24-50 to complete an impressive victory.

Willie Clayton produced another big double-double for the Giants with 13 points, 20 rebounds as well as 7 assists, while Torry Butler (22) and Mike McCall (21) combined for 43 points in the win.

Chris Alexander went 10-of-19 for his 26 points but it would not be enough for Sheffield, as they also received 21 from Dirk Williams. Anthony Collins had another double digit assist game with 11.

The Scorchers led at the end of every quarter with a biggest advantage of 11 before the visitors battled back to take the lead to set up a tense finale. Ed Lucas hit a big three to tie the game only for Ryan Richards to respond with two clutch free throws which proved decisive.

Richards finished with 16 and Tayo Ogedengbe had 14 for Surrey, whilst Matthew Bryan-Amaning’s 21 led Royals, with Lucas having 15 and Will Neighbour 13.