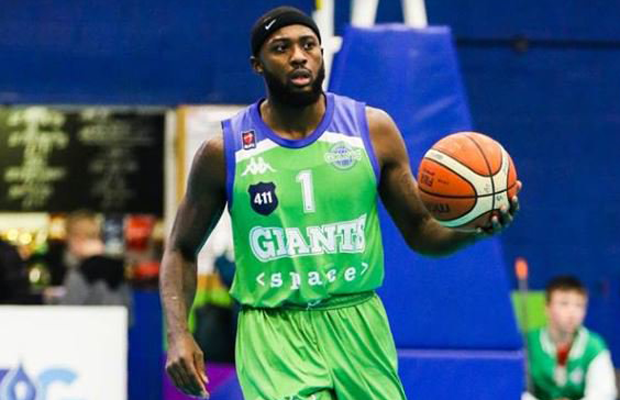 The 2019 BBL Trophy semi-finals are set, as London Lions and Manchester Giants, and Glasgow Rocks and London City Royals will battle over two legs for a place in the final.

There were also a number of other big performances, as Mike McCall Jr dropped a 50-piece in a double OT win for Manchester at their new home, whilst Leicester Riders have gone clear in second place in the table.

The Riders had led by seven points at half-time, but the Sharks took the lead at 47-45 in the third. However, an 11-2 close was capped by a Conner Washington three at the buzzer and the visitors were able to hold on for the win in the fourth.

JR Holder and Pierre Hampton started a combined 0 of 17 from the floor, but the Riders’ depth showed with season-highs from Washington and Josh Ward-Hibbert, whilst keeping Sheffield to 5 of 19 from 3-point range.

Washington went 7 of 7 from the floor for his game-high 21 points and also added 5 rebounds and 4 assists, while new signing Tim Williams posted 16 points on a solid BBL debut for Leicester.

Rob Marsden led Sheffield with 21 points and 13 rebounds, Chris Alexander had 15 and 5 assists, whilst Matthew Martin had 13.

🏀 Your Eagles hold off the Wolves to take a big win in Worcester. #BritishBasketball #LetsGoEagles pic.twitter.com/MjlnydiDnJ

Tony Garbelotto’s first game as interim head coach of the Wolves, in the absence of head coach Ty Shaw, ended in disappointment as the team slip to a record of 1-17.

After a blistering Worcester run to get back into the contest before half-time, the Eagles took control of the game with a 12-5 burst to close out the third period – allowing the visitors to dictate the tempo down the stretch.

Victor Moses’ 21 points and 13 rebounds along with Rahmon Fletcher’s 20 points and 15 assists will rightly take the headlines for Newcastle, but the bench contribution from Kyle (16) and Jamal Williams (21) should not be overlooked.

The Rocks showed no ill effects following last Sunday’s Cup Final defeat, setting up a final four Trophy clash with London City Royals. Glasgow become the third side to progress to the Semi-Final stage of the competition, following the Royals and Giants.

After a closely contested opening 15 minutes, a 9-2 run by the visitors to end the second quarter changed the complexion of the game. The Rocks went into half-time in a buoyant mood, having established a double-digit advantage.

Bouna Ndiaye (17), Gareth Murray (17) and Ali Fraser (15) did much of the heavy lifting on the offensive end for the Rocks, combining for over half of Glasgow’s points total. Bo Zeigler was the only other player to hit double-figures for the visitors in what proved to be a thrilling team display.

It completed wins in consecutive nights for Riders, who have now won four straight at home, and avenged their defeat in the BBL Trophy at the hands of the Giants.

After trailing by double-figures early on, Riders dominated the second quarter winning it 32-12 after a 14-2 burst gave them a double-digit lead with Conner Washington hitting a pair of three-pointers, as Giants managed just one score in four minutes. Jamell Anderson hit a three on the half time buzzer for 52-40 and Riders never looked back, holding their visitors to 11 third quarter points.

Josh Ward-Hibbert emerged from the bench to post a double-double of 18 points and 10 rebounds, hitting 3-4 three-pointers; while Conner Washington hit 6-8 triples for 21 points, to go with 8 assists.

The Lions are now just one round away from making it into their second major BBL final this season but first will have to face Manchester Giants in a two-legged affair.

Cheshire came close to pulling it back near the conclusion of the game, down by just eight points with two minutes remaining. A 5-2 run from Cheshire saw them pull that gap to just five with under one minute of play left but four Justin Robinson free-throws and a dunk from Brandon Peel saw the recent BBL Cup champions take one more step towards another BBL final.

Jordan Spencer had 21 points, 5 rebounds and 7 assists to lead London, Justin Robinson finished with 17 and 7 assists, whilst Kervin Bristol had 12 points and 11 rebounds.

McCall exploded for 50 points, as the Wolves appeared to be heading to their first win since opening night with a five-point lead in the first period of overtime, but McCall hit two huge threes to force another extra period and the Giants were able to get the win with Willie Clayton’s game-saving block.

McCall finished with 19-of-24 shooting overall, 8-of-9 from deep, along with 7 assists, ably backed up by a 32-point, 21-rebound performance from Willie Clayton. Ingus Bankevics added 17.

Darrell Combs’ 35 would not be enough for Worcester, who knocked down 14 threes, receiving 26 points from Adam Thoseby and 20 and 12 rebounds from Lester Prosper.

Danny Byrne’s side level their record at 9-9 to move back inside the top eight.

After trailing for a lot of the game, Rocks came up big to take the win in Cheshire!#GoRocks pic.twitter.com/z73o8ZlSMR

The home side put up 34 points in the opening quarter to lead by 10, but the Rocks gradually fought back and put together a decisive 7-0 run late in the game to surge ahead and take the win.

Tadas Rinkunas’ 22 points off the bench led Glasgow, Ali Fraser had 16 and 8 assists, whilst Kenny Carpenter finished with 14 as five players reached double figures for the victors.

The Rocks improve to 7-9 with another league success with Cheshire falling to 10-10 in sixth place.

A dominant win on the road behind some terrific individual performances.

Josh Wilcher with 19 assists and Rashad Hassan led all scorers with 34pts and 8 rebounds.

We're back in action next Sunday against the Leicester Riders.

Plymouth came out firing and racked up an impressive 40 points in the opening 10 minutes with the Scorchers unable to stem the flow of points as they found themselves facing a double-digit deficit. The visitors continued to push on for another triumph on the road.

Rashad Hassan top scored with 34 points in the win with Josh Wilcher leading the way with 19 assists as well as 19 points and six steals, while Devontavius Payne (23) and Shawn Shelton (19) also had big scoring games to add to the output.

Paul James’ side move to 10-9 in the league, despite the absence of Donte Nicholas, with Surrey now at 3-15.