Riders Climb with Double-Header Win - BBL Round Up, Week 14 - Hoopsfix.com

Riders Climb with Double-Header Win – BBL Round Up, Week 14 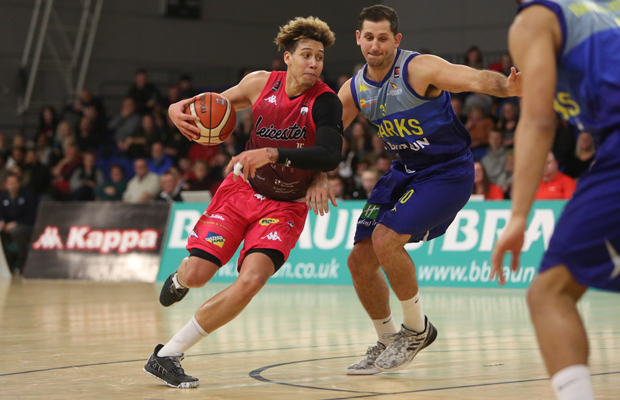 Leicester Riders bounced back from a tough December with a double-victory weeked in Week 14 of BBL action.

Here’s a round up of all the games:

After a high-scoring opening quarter, the Riders made their move in the second to lead by eight at the half and they continued to pull away with big threes at key times, whilst keeping the Sharks to 15 points or less for the final three quarters.

Pierre Hampton top scored in the win with 22 points, while the trio of JR Holder, Conner Washington and Andrew Burnett all added valuable scoring support with 13 points apiece.

Rob Marsden led Sheffield with 20, Dirk Williams had 19 and Chris Alexander finished with 15.

Vince Macaulay’s side see their advantage increase as they move to 13-2 with the Flyers now at 7-4 in fifth place.

Jalan McCloud hit two buzzer-beaters in the first half, the second of which put the Flyers up three heading into the interval. However, the Lions stepped things up in the second half to re-gain control at both ends to take the victory.

Bristol were held to just 10 points in the third and then endured a scoreless spell of over four minutes as the Lions took advantage.

Justin Robinson and Brandon Peel netted 19 points apiece in the win for the Lions, Jordan Spencer added 7 assists, with Ladarius Tabb posting another double-double with 14 points and 10 boards.

Fred Thomas and Jalan McCloud led Bristol with 14 each, and Justin Gray had 12.

Having been trailing early, behind an insane first 26-point first half performance from Robert Crawford, the home team produced a devastating display in the fourth quarter to seal the victory. The hosts opened the period on a 12-2 run and held the visitors to just eight points in the quarter.

JR Holder (25) and DeAndre Burnett (22) combined for half of the Riders points, including some vital baskets down the stretch. The pair also added 10 rebounds and seven assists between them. Conner Washington added 12 and 7 assists.

Royals move to joint-sixth in the table, with a 7-6 record, but importantly the win prevented Giants from going above them and gave Royals the head-to-head between the sides.

The teams were tied heading into the final two minutes, but Matthew Bryan-Amaning sparked a run of eight straight points, which also included an emphatic dunk from the British big man as he scored six of those, and Royals led 96-88 with a minute to play.

Will Neighbour, missed only twice on his way to 22 points, Bryan-Amaning and Ashley Hamilton finished with 16 and Orlan Jackman had 15, whilst Jules Dang Akodo had 7 assists.

Ingus Bankevics went 5-of-6 from three for his 22 points for Manchester, Vlatko Granic had 18, and James Jones 13.

Quincy Taylor had all of his 15 points in the opening quarter as Surrey led after 10 minutes, but the visitors powered ahead in the second to open up a 19-point advantage by the half. The Scorchers got back to within nine before a 9-0 close from the Giants and they eased to victory.

Torry Butler had 24 of his game-high 30 points in the first half for the Giants, whilst also adding 12 rebounds. Willie Clayton also posted a double-double with 20 points and 18 boards with Vlatko Granic adding 22 points.

Tayo Ogedengbe’s 28 points would not be enough for Surrey, with Anthony Elechi joining him and Taylor in double digits with 10.

Danny Byrne’s side pick up their sixth league win, while the Scorchers drop to 3-12 as they were unable to back up their first win of 2019 on New Year’s Day.

After an even first half, the Eagles took control in the third to open up a double-digit lead. Plymouth hit back in the fourth to draw level at 83-83 before the visitors closed the game out with the last eight points including a big triple from Kyle Williams. Newcastle hit 11 threes in the contest at 40% accuracy.

Victor Moses top scored with 18 points on 8 of 11 shooting with all seven scorers in double figures for the Eagles with a 14-point, 11-rebound double-double from Darius Defoe, while Rahmon Fletcher handed out 9 assists.

Rashad Hassan led Plymouth with 24, whilst Josh Wilcher had 19 and 9 assists, Joonas Jarvelainen 17 and Donte Nicholas 15 points, 7 rebounds and 9 assists.

The Raiders missed the chance to go level with the Eagles ahead of their meeting next Friday to open Newcastle’s new arena.

Rocks came out firing with 38 points in the first 10 minutes, but were gradually pegged back by the visitors and needed a late tip-in from Kenny Carpenter to force the extra period and Gareth Murray hit a big three to give Glasgow control.

Ali Fraser led the way with 22 points and 13 rebounds with Carpenter also posting a double-double of 21 points and 11 boards including the crucial offensive outback late in regulation. Gareth Murray added 17.

CJ Gettys had 21 and 10 rebounds to lead Cheshire, with Jalen Hayes adding 17 and Dii’Jon Allen-Jordan having 13 points, 9 rebounds and 8 assists.

The Rocks are now at 5-9 in the league with Cheshire dropping to 6-8 as they fall out of the Play-Off places.

Related ItemsBBL Round Up
← Previous Story Taylor Erupts as Scorchers Defeat Royals – BBL Round Up, Week 13
Next Story → BBL Returns to BBC Sport