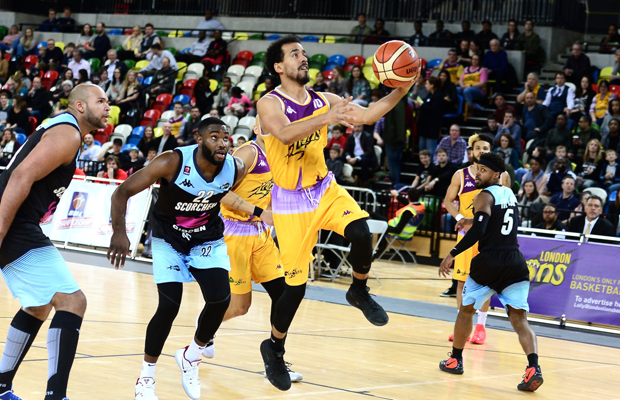 Another weekend of BBL action in the books, as London Lions picked up two convincing wins to continue their plight for the league title.

Still a long way to go in the Regular Season..#BritishBasketball pic.twitter.com/NEuHnpTmU1

Elsewhere, Riders picked up a win to continue the pressure at the top of the table, whilst Royals saw their win streak end at nine.

Justin Robinson starred for the Lions with a BBL career-high of 31 points in the win, as the home side pulled away in the second after an even first period. The home side racked up 30 points to establish a double-digit advantage and were able to hold off a late fightback from the Scorchers to win by 14.

Ladarius Tabb followed with 23 points along with 13 boards and Brandon Peel also contributed a double-double with 14 rebounds to go with 11 points.

Mo Wlliams’ 23 led Surrey, with Quincy Taylor and Chaed Wellian having 12 each, the former adding 9 assists.

No no no! 😤@jamell with the big swat!

Rob Paternostro’s side improve to 16-4 to take their winning run to six games as they denied the Wolves a third straight win.

The home side were within two points at 63-65 inside the fourth, but a 16-2 run from the Riders proved decisive. Worcester hit back with a 12-0 burst, though it was not enough as they fell to defeat.

Tim Williams (21) and JR Holder (18) combined for 39 points in the win for the Riders with Pierre Hampton enjoying an all-round game with 8 points, 11 rebounds and 5 assists, while Josh Ward-Hibbert had another impact off the bench with 13 points.

Newcastle fired in 34 points in the second quarter to take control at the half before the Flyers fought back to take the lead in the third. However, the Eagles produced a strong finish to the period and were able to hold off their opponents down the stretch, as they registered 33 assists on the game.

Jeremy Smith top scored with 20 points including key scores late on as one of six players in double figures for the Eagles with Rahmon Fletcher adding 14 points to his 12 assists for a double-double, and Kyle Williams having 17 points.

Marcus Delpeche led Bristol with 21, Fred Thomas had 20 and 9 rebounds, and Jalan McCloud finished with 19, 5 rebounds and 8 assists.

The Eagles keep up the pressure on the top two, while Bristol fall to 8-11 having now lost nine of their last 10 games.

After trailing by double-digits early on, Royals started the second stanza with a 16-2 surge to go in front as Matthew Bryan-Amaning scored eight points. The decisive run came when they followed that with an 11-2 push to open the third quarter, as Will Neighbour scored the first two baskets and Ed Lucas added a three-pointer among seven early points, to see the lead reach 56-44. Royals went on to win the third 32-20, and there was no way back for the visitors.

Ashley Hamilton (19) and Bryan-Amaning (19) split 38 points to lead the Royals, with the former adding 10 rebounds to complete a double-double along with five assists. Ed Lucas added 18 with Sam Toluwase having 12.

Rashad Hassan’s 34 for Plymouth would not be enough, whilst Donte Nicholas had 18, 12 rebounds and 6 assists, and Devontavius Payne had 14.

It was a ninth straight win in all competitions for Royals, as they remained unbeaten at home in league action all season and level the head-to-head with Raiders.

Huge WIN for the Nix as they hold on down the stretch to take this one, 88-81 against @LDNCityRoyals 🏀

We are back at EPSV on Sunday 17th March when we host @SheffieldSharks. You have got to bring the noise, just like tonight!#NixNation #BritishBasketball pic.twitter.com/loKwL90seo

The home side trailed by nine at the end of the first, but wiped out that deficit with a 9-0 start to the second and they put up 29 points in the quarter to open up a lead at the half.

Cheshire had a 79-69 advantage inside the final three minutes before the Royals closed to within four, but Momcilo Latinovic hit a big three as his side closed out the win.

Dii’jon Allen-Jordan starred with 26 points on 9 of 12 shooting along with 12 rebounds, three assists and four steals, while Daniel Norl added an efficient 21 points after going 8 of 10 from the floor. CJ Gettys had 16 and 8 rebounds.

Matthew Bryan-Amaning had 22 points, 8 rebounds and 4 steals, and Ashley Hamilton had 21.

A depleted Phoenix side move up to sixth with an 11-12 record with the Royals seeing their winning run come to an end at nine to fall to 12-7.

The Giants recovered from a slow start with a huge second quarter to turn an eight-point deficit into an eight-point lead at the half. However, the Lions dominated the third period, holding their opponents to just 10 points as they re-gained control in the contest and never looked back.

Six players hit double figures for the Lions including captain Joe Ikhinmwin with 11 points off the bench. Brandon Peel led the way with 21 points and 10 rebounds, while Jordan Spencer handed out 12 assists to go with 19 points in the win, and Ladarius Tabb had 18 points.

Mike McCall led Manchester with 24, Torry Butler had 19 and Callum Jones finished with 16 and 9 assists.

The Lions completed a weekend double to move to 17-2 ahead of next Sunday’s BBL Trophy Final, while the Giants are now at 10-11.

Plymouth showed no ill-effects of a road game less than 24 hours earlier after coming out firing in the first 10 minutes with 33 points to take control. The lead moved beyond 20 points in the third as the Raiders eased to a comfortable victory.

Rashad Hassan had another big game for the Raiders with a game-high 29 points along with 13 boards, while Donte Nicholas came close to a triple-double once again with 16 points, 15 rebounds and 9 assists in the win as the duo starred. Josh Wilcher had a 20-point and 7 assist outing.

Chaed Wellian led Surrey with 19, Mo Williams had 13, whilst Quincy Taylor and Willie Atwood added 12 each.

The Raiders move to 11-12 as they remain inside the top eight, while the Scorchers drop to 4-19 after losing both games on the road this weekend.