Worthing Stun Surrey in the Trophy - BBL Round Up, Week 12 - Hoopsfix.com

Support
Home / BBL / Worthing Stun Surrey in the Trophy – BBL Round Up, Week 12

Worthing Stun Surrey in the Trophy – BBL Round Up, Week 12 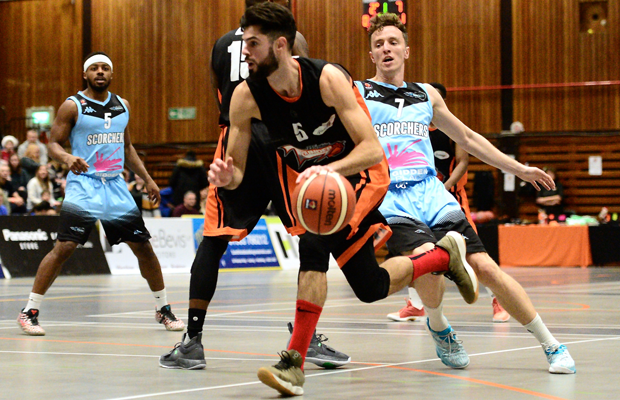 There were two big upsets in the opening round of the BBL Trophy, as NBL Division 1 side Worthing Thunder stunned Surrey Scorchers, whilst Manchester Giants took down defending title holders Leicester Riders.

Glasgow led by 12 in the second before the visitors battled back and a deep three from Darell Combs at the buzzer made it a one-point game. The gap remained heading into the fourth where back-to-back triples from Tadas Rinkunas gave Rocks control and they were able to hold on for the win.

Ali Fraser had another big game for the Rocks with a game-high 22 points along with 6 rebounds with three other players in double figures, while Kieron Achara had 9 points, 10 boards and 5 assists.

Deshawn Freeman led Worcester with 15, whilst Miki Servera had 12.

The Rocks will face either Bristol Flyers or Plymouth Raiders in the last eight after coming through the repeat of the 2014 Trophy Final.

Eagles stamped their authority on the game immediately, leading 10-0 after three minutes with Rahmon Fletcher and Victor Moses scoring twice each. They won the first quarter 34-7 as Kai Williams added seven points and Eddie Matthew came from the bench to hit the last five.

Newcastle’s stifling defence proved too much for the Kings as they forced an astonishing 36 turnovers, scoring 53 points from those, with Fab Flournoy and Jamal Williams having five steals each.

On a night when all eleven players got on the scoreboard, Eagles were led by 24 points from Eddie Matthew, shooting 9-11 (81%) from the field and 5-7 (71%) three-pointers, with 19 of his points coming in eight first half minutes as Eagles took the game early on.

Kai Williams added 18, and Victor Moses 17 for Newcastle, who registered 39 assists in the game, whilst Edinburgh were led by 17 from Ryan Armour, 14 from Calum Nicol and 11 from Konrad Kantorski.

Eagles are six times BBL Trophy winners, but not since 2015, and will meet Manchester Giants in the quarter-finals.

Surrey Scorchers had the lead heading into half-time, but when the second half commenced Worthing exploded out of the locker room with an incredible 18-0 run in the opening five minutes of play. They held that lead until a trio of Henry Wilkins three-pointers got Surrey back to within four late on, but a pair of Tom Ward free-throws saw it out for the hosts, as they spoiled Ryan Richards’ BBL debut with Surrey.

Brendan Okoronkwo starred for Worthing, finishing with 22 points and 9 rebounds, Zaire Taylor had 16 points and 10 assists, and Jorge Ebanks 14.

Tayo Ogedengbe had 21 to lead Surrey, Henry Wilkins finished with 17 and Richards had 14.

Danny Byrne’s side also ended the title defence of the BBL Cup holders and set up a last eight showdown with Esh Group Eagles Newcastle.

The Giants were down nine after the opening quarter before putting up 31 points in the second to move ahead. Leicester battled back with a 15-2 run late in the third to keep it close, but fell short in a fourth quarter shootout.

Mike McCall top scored with 20 points amongst a balanced attack for Manchester as all six scorers had at least nine points. James Jones dished out 9 assists with his 15 points, Torry Butler finished with 17 points and 10 rebounds and Callum Jones had 15 points, 7 rebounds and 5 assists.

Wayne Martin led Leicester with 19 points and 12 rebounds, whilst Conner Washington and DeAndre Burnett added 16 each, the former finishing with 7 assists.

Solent took the lead for the first time in the second and held on to lead at the half, but the home side re-gained control in the third and were able to see out the second half to take the victory.

Daniel Norl led the way with 20 points in the win with CJ Gettys posting an all-round effort of 11 points, 16 rebounds and 6 assists and Sol Rolls-Tyson having 17 points, as they helped their side through.

Herm Senor II led Solent with 26, Travis Charles had 22, and Jon Averkamp had 7.

Ben Thomas’ side earn a trip to London Lions in the last eight.

In a battle of the top two in the BBL Championship, the Lions came out on top once again to continue their strong start in all competitions. The Lions trailed heading into the half-time break, but came out firing in the third with a 22-13 period to take control and they were able to see out the win, despite a late burst from the visitors.

Dirk Williams had a huge 30-point game at the Copper Box last week, but was held to 13 points on 28% shooting this week with the Lions’ defence paving the way for the win.

Brandon Peel led London with 22 points and 14 rebounds, Justin Robinson had 20, and Jordan Spencer 14 with 9 assists.

Chris Alexander had 20 to lead Sheffield, with Leslee Smith adding 14.

The Royals opened the game 36-0 in a dominant start and they were able to ease through, bringing up their century with their first score of the fourth.

Ed Lucas led the way with a 30-point haul on 12 of 16 shooting in the win, whilst adding 7 rebounds and 5 assists with plenty of scoring support as five other players hit double figures, including 19 from AJ Roberts and 14 from Sam Toluwase.

Alex Koukouravas led Wales with 10, but it’s the Royals who advance to face Worthing Thunder.