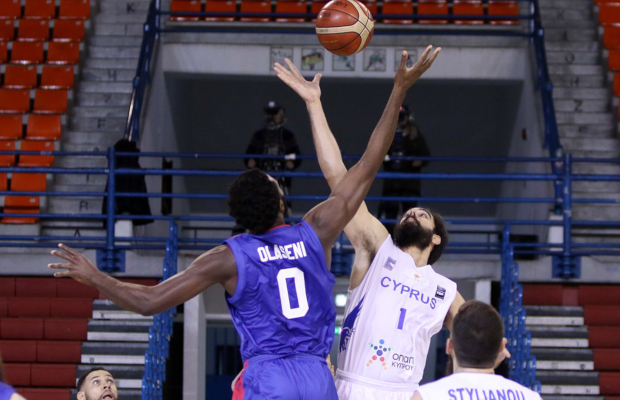 Great Britain’s Senior Men bounced back from last week’s defeat to Austria with a 61-75 victory against Cyprus, in Nicosia, on Monday evening.

Alberto Lorenzo’s side are now 1-1 in Group D of the EuroBasket 2021 Pre-Qualifiers with their final two games taking place in the February window.

Myles Hesson led the way with a game-high 21 points with Ovie Soko and Gabe Olaseni also in double figures with 14 and 12 points, respectively. Teddy Okereafor filled the stat-sheet with eight points along with six rebounds, six assists and five steals.

Cyprus moved ahead early with a 9-0 run to double up the score at 14-7 before GB found success inside to close the gap with captain Dan Clark coming off the bench to beat the buzzer with his side trailing 20-16.

Clark and Soko hit threes to put GB ahead at 26-27 with 4:07 left in the half, which sparked a 16-2 burst with Okereafor and Hesson also hitting from downtown in a hot spell for the visitors. Cyprus closed on a 6-0 run, though GB were still ahead at the half with a 34-37 advantage.

GB strengthened their grip in the third as they held their opponents to just 10 points in the quarter, while further triples from Okereafor and Hesson helped establish a double-digit cushion with the lead pushed out to 44-56.

The gap continued to grow in the final period with GB in firm control with Hesson driving baseline for a big dunk en route to wrapping up a comfortable success, despite some late threes from the home side.

GB only gave up 8 turnovers compared to 17 from Cyprus with 9 of 27 shooting from 3-point range, whilst holding their opponents to 37% from the floor.