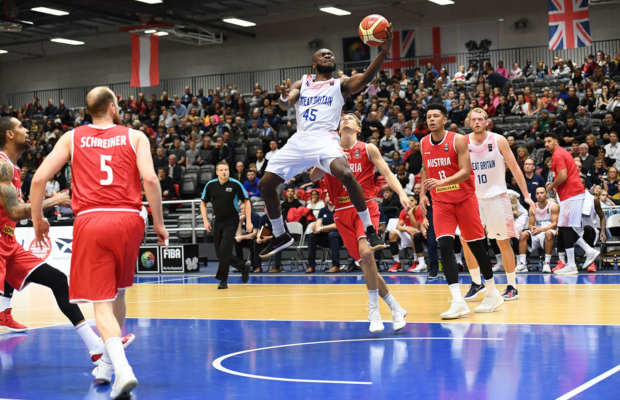 Great Britain Senior Men’s return to action ended in defeat as they were beaten 82-96 by Austria in their EuroBasket 2021 pre-qualifiers opener, in Manchester, on Thursday evening.

Alberto Lorenzo’s side were competing for the first time since their disappointment in the World Cup 2019 qualifiers and they suffered another loss as Sylven Landesberg fired in an incredible 49 points.

“From my point of view, we were trying to work as a team and the players are the first who feel frustrated about this situation,” said Great Britain head coach Alberto Lorenzo.

“So it’s really difficult to try to keep working the right way in that situation. But I don’t have any doubt about them, they are working for GB and they feel proud about that.”

GB head to Cyprus – the third team in Group D – on Monday with the group winners advancing to the EuroBasket 2021 qualifiers, though the two other sides will get a final chance in the third round of the pre-qualifiers.

Myles Hesson led GB with 18 points, while Andrew Lawrence had 16 and Ovie Soko finished with 15.

“We can’t allow any team to come in and score 96 points and expect to get a win,” Hesson said afterwards.

“They out-rebounded us, got 12 offensive rebounds, I mean whether it’s one person or the whole team – they scored 96 points and that that was it for us, our defence wasn’t good enough.”

New GB captain Dan Clark opened the scoring with a three as part of an 8-0 run with the hosts ahead for the majority of the first quarter. Ogo Adegboye scored on his GB return to make it a seven-point advantage at 26-19.

Ovie Soko takes the dish from @Dan00Clark and throws down hard with two hands on the baseline for @gbbasketball! 🇬🇧🏀 #Hoopsfix #BritishBasketball pic.twitter.com/I5dGunVSgu

However, Landesberg – making his debut – helped bring Austria level at 26-26 at the end of the first, instigating a 17-0 burst across quarters as his side surged ahead. The Brooklyn-born guard quickly moved to 22 points with seven early points in the second.

GB broke their scoreless streak in the face of a double-digit deficit as Myles Hesson found his way to the line before Landesberg continued his onslaught to ease his way to 40 points to give Austria a commanding 39-59 advantage.

Teddy Okereafor responded with a three out of the timeout and GB would head into half-time trailing 42-60. Landesberg picked up a couple of early fouls in the third and was held to just two points after seven minutes, but GB struggled to cut into the Austrian lead.

Ryan Richards finished a nice post move with GB still 18 points behind at 59-77 ahead of the final 10 minutes after the third was level at 17-17. Carl Wheatle scored eight points in a row for GB to offer a brief revival before Austria hit back as their lead peaked at 22 points at 69-91.

Hesson had a big throwdown late on as GB put together an 11-3 run to reduce the final losing margin.

– GB’s starters were Andrew Lawrence, Teddy Okereafor, Gareth Murray, Dan Clark & Gabe Olaseni
– Ogo Adegboye marked his return to GB duty with his first appearance since 2013
– Josh Steel made his Senior debut for GB
– GB face Cyprus away in Nicosia in their second game on Monday at 5pm UK time
– Their other home game in the group against Cyprus takes place in February, 2019