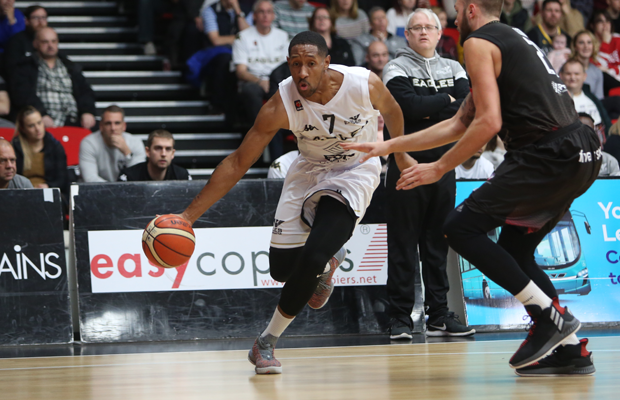 The final four left standing in the BBL Cup were set this season, as Manchester Giants, Newcastle Eagles, Glasgow Rocks and London Lions will await the semi-final match-ups of the draw on Tuesday.

Meanwhile, in league play, London Lions maintained their lead at the top of the table with a win over Worcester, Leicester took down Bristol, Eagles escaped Cheshire, and Glasgow and Sheffield both picked up victories.

Kieron Achara – who was stripped of the Rocks’ captaincy last week – came up with big plays at both ends to send the Rocks into the last four. Achara’s late basket put the Rocks up two and the defence held firm to seal the victory, with his blocked shot sealing it.

Scrappy fight for the ball as Kieron gets on the end of it for two to give Rocks the lead with ten seconds left#GoRocks pic.twitter.com/qNAmz9tR5c

Kenny Carpenter top scored with 21 points in the win including a basket inside the final minute before Achara showed his experience with clutch plays and finished with 12 points, five rebounds and four assists. Ali Fraser added 14.

Coach Darryl Wood had the following to say after Rocks win:

“Tonight was a victory we both needed and deserved! The players have to take credit for grinding out that victory. A lot didn’t go our way but we stayed together and executed the game plan for 40 minutes. Tonight its a time to enjoy this but tomorrow it time to focus on the next one.”

Rashad Hassan had 28 points and 10 rebounds to lead Plymouth, Devontavius Payne had 21, and Donte Nicholas added 19 points, 6 rebounds and 10 assists.

#WOLFPACK let's hear what Coach @TyD_Shaw had to say after last night's game..

The Lions are now 8-1 with the bottom-placed Wolves dropping to 1-9, despite 24 points and 18 rebounds (8 offensive) from Deshawn Freeman ahead of Sunday’s Cup clash.

Andre Lockhart doubled the Lions lead with a late three to end the opening quarter and the visitors held firm for the remainder of the game, seeing off a late revival from the Wolves in the third.

Justin Robinson top scored with 17 points and added seven rebounds in the win, while Jerelle Okoro played a key role with 16 points off the bench with Ladarius Tabb picking up early fouls and limited to 14 minutes.

Robert Crawford added 12 for Worcester, whilst Jordan Whelan had 8.

Despite recording their second loss of the league campaign, Bristol remain in fourth position in the standings – just two points behind DBL Sharks Sheffield with a pair of games in hand.

The visitors raced out of the blocks to take control of the game from the opening tip. The Riders held the hosts to just seven points in the first quarter and capped a sensational opening period with a buzzer-beating three from Conner Washington.

Leicester put on a defensive clinic, holding Bristol to just 13 points in the first half. The Riders were relentless throughout as the hosts struggled to find the basket – shooting only 32% from the field.

JR Holder led all scorers with 16 points for the Leicester, while Conner Washington added an efficient 14 points off the bench in what proved to be a low scoring contest.

Fred Thomas 14 led Bristol with 14 and Daniel Edozie joined him in double figures with 10.

Kyle Williams produced a career-high 26 points off the bench, supported by double-doubles from both Victor Moses (19 points and 10 rebounds) and Rahmon Fletcher (15 points and 10 assists), in what proved to be a thrilling contest. The Eagles managed to keep their composure down the stretch and convert all six of their free throw opportunities in the final few minutes.

The hosts improve their league record to 7-2 and take outright control of second spot in the standings.

Fab Flournoy’s side became the second to book their semi-final spot ahead of the last games on Sunday, as the Eagles put up 30 points in the opening quarter to seize control. Newcastle continued to maintain their lead and were able to hold off the second-half fightback from last season’s treble winners.

Victor Moses had a game-high 28 points for the Eagles, including 12-of-13 shooting from inside the arc, while Kyle Williams stepped up off the bench for the second night in a row with an efficient 21 points in the win. Rahmon Fletcher had 14 points and 8 assists.

The league leaders defended home court to advance to knock Worcester, who were unable to match their run to the Final from last season.

Spencer added 7 rebounds and 5 assists, and reeled off an 8-0 to put the game out of reach after Worcested had tied it up at 74 in the final five minutes. Brandon Peel and Justin Robinson both added valuable scoring support with 20+ points apiece.

Darell Combs had 21 points and 7 assists to lead Worcester, with Filip Kramer and Deshawn Freeman adding 17 each, the latter with 9 rebounds.

Manchester join Newcastle, Glasgow and London in the last four, as they opened up a double-digit advantage in the first quarter and Cheshire gradually fought back to set up a thrilling finish. They briefly took the lead ahead of the final minute before Manchester were quick to restore their advantage and an and-1 play from Vlatko Granic proved decisive.

Mike McCall made a fast start and finished with a team-high 19 points along with seven assists, while Willie Clayton added another double-double after collecting 14 rebounds to go with 10 points. Callum Jones added 16 points and Granic added 15.

Cheshire were led by 21 points, 5 rebounds and 4 assists from Dii’jon Allen-Jordan, with Louis Sayers adding 14 and Jimario Rivers 10 points, 8 rebounds and 6 assists.

💬 "We're definitely going to try and take this momentum forward"

The Rocks won all four quarters including scoring 30 in the second period as they continued to pull away before completing the win.

Bouna Ndiaye led the way with 20 points and 5 assists, while five other players hit double figures including Kieron Achara, who added 10 rebounds and 4 blocks to 11 points.

Quincy Taylor had a 28-point, 5-assist outburst, and Josh Steel and Tayo Ogedengbe added 17 each, the former including 7 rebounds, 5 assists and 3 steals.

The Rocks improve to 3-7 with two of their wins coming against the Scorchers, who now fall to 2-7 in second bottom.

The Raiders were within four at the midpoint of the fourth before a triple from Mike Tuck sparked a 7-0 run to help close out the victory. Tuck led his side to victory with 19 points on 7 of 9 shooting along with 9 rebounds with four other starters also in double figures in the win.

Rashad Hassan had 17 to lead Plymouth, Zak Wells had 11, and Donte Nicholas finished with 9 points, 12 rebounds and 8 assists but added 10 turnovers.

Plymouth were held to 57 points – their lowest total of the season with Josh Wilcher joining Joonas Jaarvelainen on the sidelines through injury.

Atiba Lyons’ side move to 7-3 as they recorded a sixth straight league win, while the Raiders are now at 4-5 having also suffered defeat in the BBL Cup, on Friday.