Cheridene Green Leads Tennessee Into Second Round of NCAA Tourney 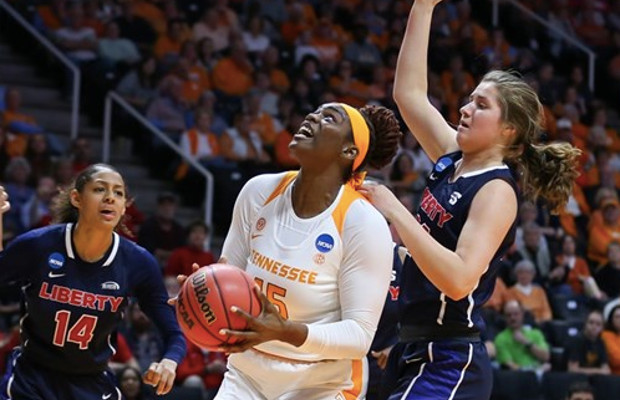 Cheridene Green posted the second double-double of her career at University of Tennessee in an opening victory in the NCAA Tournament.

The redshirt junior finished with 15 points and 12 rebounds to lead the Lady Vols to a convincing 100-60 success over Liberty.

Green went 5 of 7 from the field in her 26-minute display – finishing two points short of a career-high registered against Vanderbilt earlier this season.

UT advance to the Round of 32 where they will face No. 6 seeds Oregon State.

Meanwhile, Anna Popovic had 2 points, 2 rebounds and 1 steal as Elon suffered a 62-35 loss at the hands of NC State in their First Round encounter.

Shanice Norton and Savannah Wilkinson get their tournaments underway with LSU and FSU this weekend.

In the National Invitational Tournament (NIT), Jay-Ann Bravo-Harriott scored a game-high 18 points to lead Toledo to a 64-50 win over Wright State.