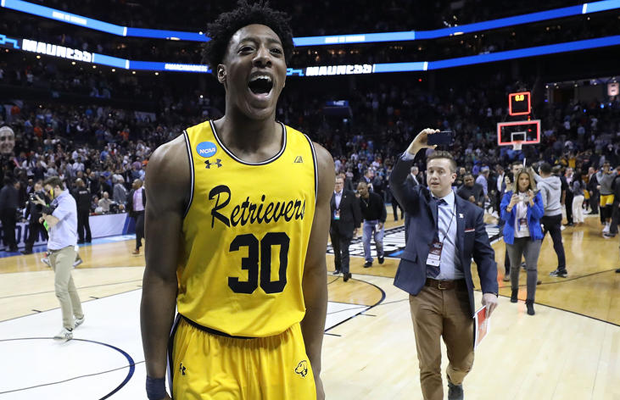 Dan Akin made history on Friday night as he helped his UMBC Retrievers become the first no. 16 seed to beat a no. 1 in the NCAA tournament as they upset Virginia 74-54.

It is the biggest upset in college basketball history, with no. 16 seeds having lost their previous 135 games to no. 1s since the tournament expanded to 64 teams in 1985.

History has been made.#UMBC defeats #Virginia 74-54, as the No. 16 seed knocks off a No. 1 seed for the first time in the history of #MarchMadness pic.twitter.com/GDIzXBA6nP

The Retrievers left no doubt, turning a close game against the top overall seed in the tournament into a second-half blowout.

Akin, a former England Under-18 and Barking Abbey/Kent Crusaders forward, started for UMBC, playing 22 minutes and finishing with 2 points, 1 rebound and 1 assist – his basket was the school’s first in the NCAA tournament in a decade.

In just its second NCAA appearance, UMBC (25-10) never trailed after intermission and advanced to Sunday’s round of 32 to face No. 9 Kansas State.

UMBC took down a team that completed an impressive 31-2 season, having won both the ACC regular season and conference tournament titles, with expectations of bringing the school’s first national title. Meanwhile, it came from the unlikeliest of opponents; UMBC are ranked 188th in the country according to the Ken Pomeroy efficiency ratings.

This was the first-ever win in the NCAA Tournament for the Retrievers, who last played in the big dance in 2008.

Akin helped UMBC to the Tournament by winning the America East Conference championship whilst picking up All-Tournament team honours.