Boston Celtics Rally from 22 Down to Defeat Philadelphia 76ers at NBA London - Hoopsfix.com 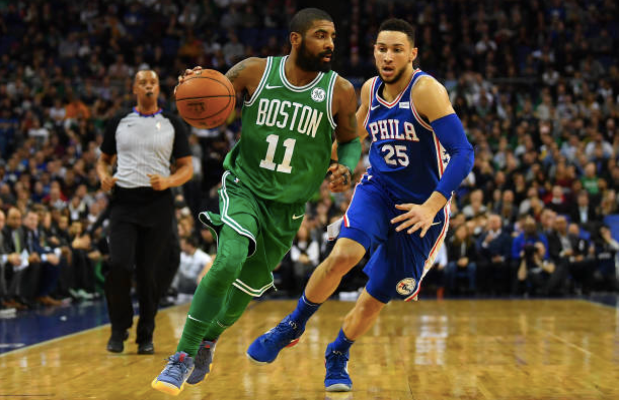 Boston Celtics powered to a 114-103 victory over Philadelphia 76ers at The O2 Arena in London having trailed by as many as 22 points in the first half.

Jaylen Brown was huge for the Celtics with a team-high 21 points, while Kyrie Irving’s influence on the game grew throughout and he finished with 20 points, six rebounds and seven assists in the win.

Sixers – who were the ‘home team’ for the contest – raced out of the blocks with a 9-2 run with JJ Redick quick to find his range with 13 first-quarter points. The gap was five points at 28-23 at the end of the opening period, but Philadelphia enjoyed a dominant 21-4 start to the second to open up a commanding 22-point advantage.

The Celtics started to come to life with German Daniel Theis sparking the crowd with a big dunk on Jerryd Bayless before Irving netted his first triple as the lead was soon cut to single figures at the half, 57-48.

Philadelphia restored their double-digit advantage early in the third when play resumed before the momentum soon shifted the way of the men in green with Irving beginning to heat up with back-to-back triples.

Ben Simmons responded driving baseline for the big throwdown, but Boston took their first lead of the game and began to take control.

Marcus Morris hit a three to put his side up seven and they took a 79-85 lead into the final period. From there, the Sixers briefly trailed by four, though that was as close as they could get with a 10-0 response from Boston helping them stretch clear.

Simmons and Morris were at the forefront of a late scuffle and that was a sign of frustration for the Sixers – who drop to 19-20 in ninth in the East – with Boston able to wrap up the win in London to move to a 34-10 record.

Redick finished with a game-high 22 points in defeat with Joel Embiid producing a 15-10-5 stat-line, whilst not being at his best having been held to 35% shooting from the floor.

– This was the 8th NBA regular season game held in London at The O2 Arena
– The official attendance was a 19,000+ sellout, but there were a number of empty seats visible in the lower tier
– Dikembe Mutombo biggest cheer of the night when introduced alongside fellow NBA legends [Parrish, Miller, Hamilton & Amaechi]
– Adam Silver again referred to scheduling challenges in response to adding more games in Europe