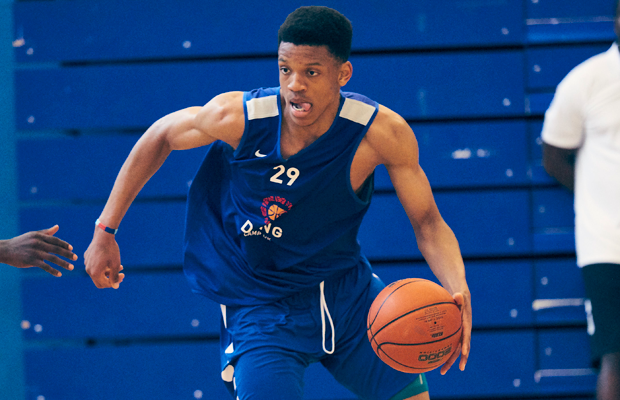 The first re-rankings of the top 20 players from the 2017 edition of Deng Camp have been released, following on from the completion of the first part of the 2017-18 EABL and NBL seasons.

There have been some minor changes from the original top 5, though the top two, in Michael Anumba and Caleb Fuller stay the same, with Sesan Russell and Hosana Kitenge switching positions at three and four, plus a new number 5 in AJ Edu – who would have been a lock for the original top 5 had it not been for missing time at camp due to an injury after a strong first day.

“The re-ranking process is a lengthy one but something we really take seriously and want to get right to be viewed as a respectable gauge of where players rank within British basketball,” Camp Director Steve Vear said.

“We track all the campers throughout the season by gathering as much statistical data as possible to mainly promote them but this is also a big part of when re-ranking.

“We also get input from EABL and National League coaches which is a massive help to not just look at stats but get valid opinions to see the bigger picture of improvements and also comparisons.

“Every year I feel we get better at it and the ranking system seems to create an extra little bit of competitiveness within UK hoops with many elite players trying to move up the rankings throughout the season. This is a big outcome we hoped to achieve so glad to see it become a reality!”

Anumba has had an impressive start to NBL D1 season leading Manchester Magic in minutes while posting 14.1 points, 5.7 rebounds & 2.6 assists on 47% field goal shooting, meanwhile is sixth in the EABL in scoring (18.8ppg), as he leads Loreto.

Staying put as the #2 ranked player is Caleb Fuller with a solid campaign so far in his debut season for Barking Abbey and Kent Crusaders putting up numbers in NBL D1 of 14.8 points, 4.3 rebounds and 2.9 assists per game on 48 FG%.

Russell jumps Kitenge into number three, after posting 11.6 points, 3,4 rebounds & 3.6 assists in NBL D1, and dominating early EABL games, being third in the league in efficiency, fourth in scoring (19.8ppg), and first in assists (7.0apg) and steals (5.5spg).

AJ has climbed 3 spots into the top five after a blistering start to the EABL campaign posting monstrous numbers of 22.4 points and 15.8 rebounds, along with 3.4 blocks on 53.4 FG% resulting in a 33.0 efficiency rating.

Other big movers include Edoardo Del Cadia, who climbed 4 spots to break into the top 10 as the new #9 ranked player after a fast start for Myerscough College in both the EABL and NBL D3. He is averaging 18.3 points and 8.6 rebounds across competitions, and is second in the EABL in efficiency, along with scoring (21.6ppg) and rebounding (12.4rpg).

It should be no surprise that Jonny Hall has moved in the Top 20 landing at the #15 spot. The 7’0″ big man from Ipswich continues to rapidly improve, dominating both the EABL and NBL D2 averaging an eye-opening 25.7 points & 15.2 rebounds on 54.8 FG%.

Squeezing into the top 20, Jonathan Brown becomes the #17 ranked player following a breakout start to the season leading Canterbury High School to 3rd place in the EABL posting 17.3 points, 6.2 rebounds & 3.8 assists. He is also posting a team high 21.6 points in NBL D4 for Kent Crusaders.

Eisley Swaine comes in at the #18 ranked spot after torching the ABL (32.4 pppg) but this year has shown he can also compete at the higher level in NBL D1 for Bradford Dragons with solid numbers of 9.9 points, 3.5 assists and 2.6 rebounds.

The next re-rankings will take place in April 2018 with final rankings in August 2018.