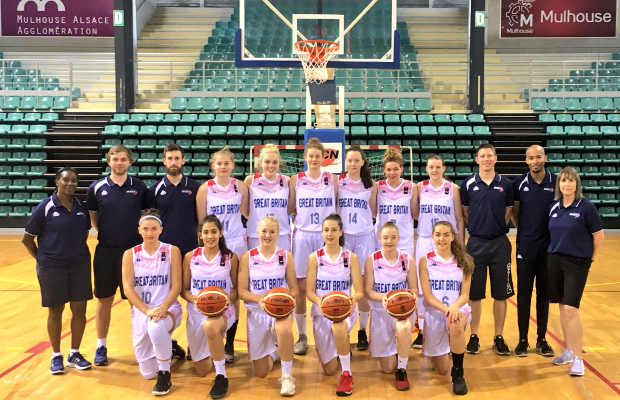 Great Britain Under-18s continued their preparations ahead of next month’s European Championship with a 3-game series in Mulhouse against France.

Vanessa Ellis’ side took on the Division A opposition having recently lost 2-0 in a series in the Netherlands.

“Overall this has been a very beneficial three-game preparation camp for the GB U18 Women,” said Ellis.

“The players really improved this week because of their commitment to take the opportunities to work on different aspects of the game.

“I feel that this team are ready to compete at the European Championships.

“The entire staff are very pleased with progress we have made as a group heading into our final preparations in Manchester next week.

“I would like to thank France for their hospitality throughout this week. It was great to have a chance to compete in such a good venue, against a high calibre Division A team.”

GB Under-18s opened with a 13-point defeat against France in the first game of the series.

Holly Winterburn top scored with a game-high 15 points along with five steals as the only player in double figures for GB.

“We will highlight the few details we need to improve in our next game.”

GB kept things tight in the opening period with the scores level at 10-10 after 10 minutes before the hosts broke clear in the second to lead 31-20 at the half.

The gap was cut in half with a 9-3 start to the third, though France would edge the quarter 12-11 to extend their half-time lead.

Another close-fought quarter ensued in the fourth as GB were once again edged out by a point as they went down 61-48 with the second quarter proving costly.

GB Under-18s showed their fighting qualities with a determined second half effort after a dominant first 20 minutes from France set the platform for a 22-point win.

The visitors won the second half 36-30 to give plenty of encouragement ahead of the final game.

“Game 2 was an excellent test for us,” said Coach Ellis. “France stepped up their intensity, starting the game with full court pressure and continued it throughout.

“Although we struggled in the first half, an honest and direct team-talk at half-time was the catalyst to major improvements and execution in the second half which was very pleasing from a coach’s point of view.

“The players really stepped up, took responsibility and competed.”

Dani Lozzi top scored with a 17-point haul including 5-of-7 from the field and 7-of-8 at the line.

France raced out of the blocks to lead 16-1 after the opening five minutes and their advantage continued to grow with the gap hitting 28 points at 41-13 going into half-time.

However, GB refused to be disheartened by the deficit and they rallied to take the third 16-12 before pouring in 20 points in the final period to finish on a high.

GB fell to their third defeat in the series, but took plenty of positives from the experience against Division A opposition.

Holly Winterburn was the only player in double figures with 10 points, while Jade Blackburn added nine points.

GB were held scoreless over the first five minutes with France taking a 13-6 lead after 10 minutes.

The gap hit 13 points at half-time with GB trailing 30-17. France continued to pull clear in the third with a 22-12 third period.