Kapoulas Reflects on GB U20 Division A Promotion 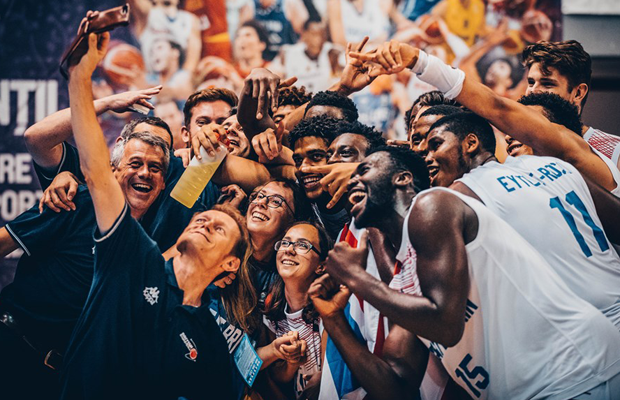 Head Coach Andreas Kapoulas has paid tribute to his squad and coaching staff following the Great Britain Under-20 Men’s promotion to Division A on Sunday afternoon.

GB defeated Russia 81-65 in Oradea, Romania, to finish third at the Division B European Championships and secure promotion. The side follows in the footsteps of the 2013 squad and ensure a return to the top-flight at the second time of asking having dropped down in 2015.

“It is definitely a great feeling to have achieved promotion and be back in Division A, a goal that we set from day 1 of our preparation,” he told Hoopsfix.

“It has been an unbelievable team effort and I am very proud of all our players and staff for their hard work, commitment and perseverance.

“We had to deal with adversity and challenges along the way and full credit has to go to our players for the great character and stay-ready mentality that they have shown throughout the preparation and competition phases.

“We were able to bounce back from a tough loss to Netherlands on the first day of the championship and produce memorable performances versus basketball countries such as Russia and Poland to make it to the semi-finals. Not to mention bouncing back from the disappointment of the Croatia semi-final to respond with our performance over Russia to clinch 3rd place and promotion.

“It all goes back to our players and their pride and passion for representing GB.

“I want to make a special mention to our coaching staff; Lloyd Gardner and Josh Merrington, as well as our team manager, Mark Lloyd and team physio, Mark Dayson. It has been a true team effort on and off the court and their professionalism, attention to detail and hard work was second to none and definitely proved to be key to our success.

“The support that we have received from back home has been extraordinary and shows how many people care about British Basketball and want to see it grow.”

Overall, GB finished 5-2 at the Europeans, picking up wins against Russia (twice), Slovak Republic, Azerbaijan, and Poland, whilst falling to Netherlands in their opener, and Croatia in the semi.

Akwasi Yeboah was named to the All-Tournament team, leading GB in scoring at 14.3ppg, whilst Carl Wheatle was the side’s most efficient player, with a 16.7 rating with averages of 10.6 points, 9.1 rebounds and 2.3 assists, whilst RJ Eyte-Rock led the team in assists at 3.0 per game.