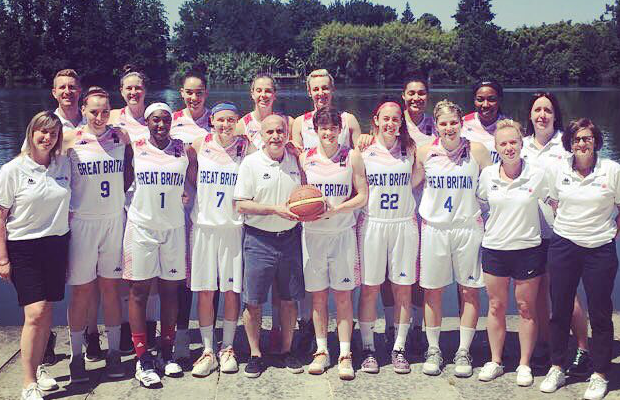 Great Britain’s Senior Women maintained high spirits despite being beaten 3-0 by France A in Le Temple-sur-Lot over the weekend.

Chema Buceta named a squad of 13 players for a second camp ahead of the trip to France with five players added to the team that played in Belarus last month.

The team headed to Le Temple-sur-Lot for a three-game series against France A – the reserve National Team – with the hosts preparing for the upcoming Francophone Games in Ivory Coast.

For GB, it was another chance for the team to gel and for Buceta to look at a number of players ahead of the 2019 FIBA EuroBasket Women qualifiers.

“These players deserve a lot of respect and recognition for their high commitment to the GB National Team – a great improvement,” Buceta commented on Twitter.

Here’s a recap of each game that took place over the weekend:

Chantelle Handy fired in a game-high of 18 points but GB suffered a 77-56 loss in the series opener in Le Temple-sur-Lot.

The GB forward went 6-of-12 from beyond the arc and also added seven rebounds, while Rachael Vanderwal – who recently signed in Spain – also in double figures with 15 points.

GB made a bright start to lead 11-17 at the mid-point in the first before conceding a 14-0 run across quarters as France eventually moved 47-38 ahead by half-time.

The hosts were paced by Lidija Turcinovic’s 16 points and they held GB to seven points in the final period to complete a comfortable victory.

GB fell to a second straight loss, but produced an improved performance before going down 72-65.

Siobhan Prior went 4-of-4 from the field in a 12-point haul in 13 minutes of action with Azania Stewart and Vanderwal also adding 12 points apiece.

The visitors were held to 32% shooting from the field, but frequently got the foul line with Vanderwal netting 10 of GB’s 22 made free throws.

France pulled away towards the end of the first to open up a 10-point gap, but GB scored 40 points in the middle periods and tied the game at 41 in the third.

With five minutes to go, GB were down four at 62-58 and ultimately fell short as they dropped to 0-2 on the series.

Marieme Badiane top scored with 17 points on 6-of-10 shooting along with seven rebounds in the win.

GB led for the majority of their final game of the series before suffering a 50-40 loss.

Buceta’s side held France A to just 14 points in the first half and were still ahead going into the final quarter, but a 19-7 period proved costly.

Minutes were again spread throughout the roster with Handy leading the way with eight points, while six players all added five points each including Stewart, who added nine boards and four steals.

GB made their best start to the series with an impressive 3-15 opening 10 minutes and were still in command at the half at 14-23.

The hosts began to fight back in the second half as the lead was cut to jut two points at 31-33 before the comeback was complete in a dominant finish to the game.