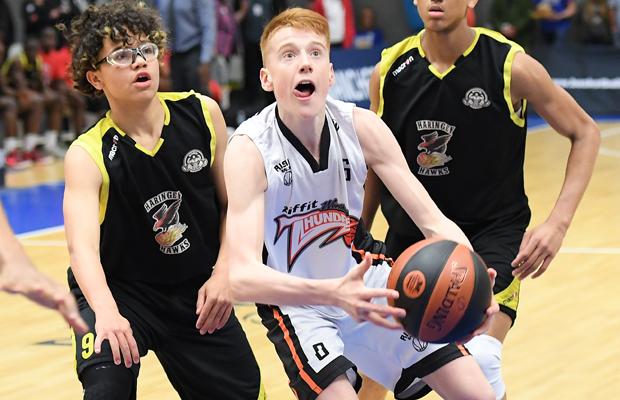 Worthing Thunder claimed the Under-14 National Title with an 87-72 win over London Thunder Lewisham on Sunday in the final at the National Basketball Performance Centre.

“This season has been a very hard competitive one with not many easy games,” Worthing Head Coach Mark Richards commented.

“To achieve the first National Championship 2 years ago was fantastic, but to do it again was absolutely amazing. The boys have worked hard improving their game, as individuals, but even more so as a team, all season, and they peaked at the perfect time and I’m proud of every one of my boys.

“As a coach we put hours of our time planing sessions, running practices and traveling around the country at weekends for moments like these. I told my boys to take time to take it all in as some players never get to have this experience.

“To make things even better our U16s team also became National Champions just before us. Its an honour and a privilege to be associated with this Club and the fantastic coaches and players we have.”

Togo led Manchester with 17 points, whilst Hanson had 16 points and 11 rebounds for Magic.

Birmingham were led by Pharrell Wallace-Steele with a 21 point, 15 rebound double double, with Tyrese Lacey having 17 points and 11 steals.

Cameron Hildreth exploded for 37 points, 10 rebounds, and 5 steals, going 7 of 10 from beyond the arc, with Gaye adding 16 points.

Birmingham were led by 26 points and 15 rebounds from Pharrell Wallace-Steele.

Magic were led by 20 points from Kai Bradburn-Lewis, and 14 points, 9 rebounds, 3 asissts and 6 steals from Togo.