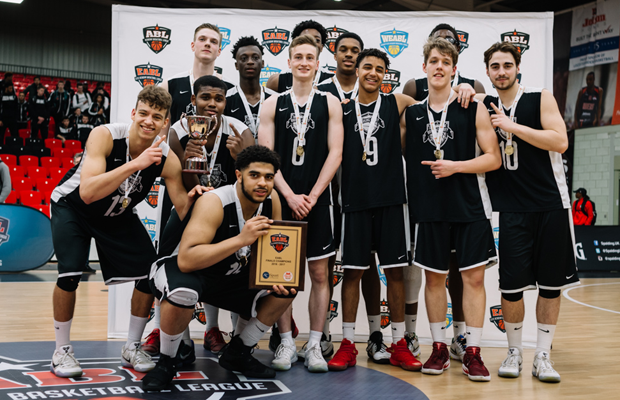 Dan Akin put in a dominant performance with 28 points, on 13-of-15 shooting, whilst adding 14 rebounds, two assists and two steals on his way to claiming the MVP award.

BA finished the regular season 14-0, and then completed another three wins to finish up 17-0, as they jumped out to an early lead on Charnwood and never looked back.

“It’s great – we worked the whole season to get this,” Akin said.

“Our goal at the beginning of the season was to win a Championship so it’s great to get this. Charnwood didn’t come out too strong, we expected a much better matchup, but we were the better team on the day.”

Congratulations to @AbbeyBasketball – a perfect undefeated season and regaining the title they last won in 2014! 🏆 🏆#theEABL pic.twitter.com/PvTBmZyqE1

“I’m really proud of the guys – the effort they’ve put in this season, the coaching staff as well. Myself and James (Vear) are here today – but all the guys not here – are all grafting behind the scenes and might not be seen.

And on the perfect season, he added:

“I didn’t even think about it, to be honest – coming in it wasn’t about the undefeated, it was about winning.

“Being undefeated doesn’t mean a lot, unless you win the final game – that’s the only thing that matters.”

Amin Adamu had 14 and RJ Eytle-Rock added 13 points for BA, whilst Charnwood were led by 21 points from Sesan Russell and 16 and 10 rebounds from Henri Lanton.

It was Charnwood who struck first to take an early lead, but a 6-0 BA run, punctuated by a huge dunk from Dan Akin saw BA regain control and from there they never allowed Charnwood back into the game.

Holding a 20-11 lead after the opening quarter, BA opened the period with an 8-0 run and it wasn’t long before the deficit was 20.

Halftime saw BA lead 44-25, as Akin already had 14 points on 7 of 8 shooting, whilst Sesan Russell was doing all he could to keep his side in the game.

However, it would not be enough. BA never let up as they cruised in the second half to become the only time two time EABL National Champions.