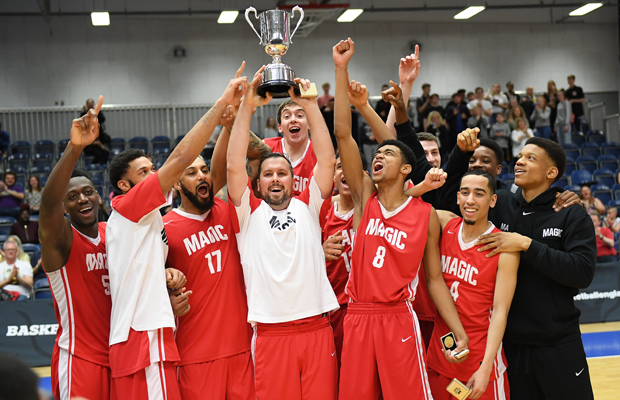 Manchester Magic defended their NBL Division 1 Men’s playoff title with a comfortable 73-53 win over Loughborough Student Riders in the final on Sunday at the National Basketball Performance Centre in Manchester.

Magic crushed Loughborough in the second quarter, where they held them to 5 five points, whilst scoring 22 to have a comfortable lead which they wouldn’t relinquish the rest of the way. They add the Playoff title to their National Trophy title from February.

Duane Morgan picked up MVP for his 20 point, 12 rebound double double, as Kayin Derby and Kaiyem Cleary added 9 points each.

“It feels great,” Morgan said after the game. “All the hard work and sacrifices during the season have paid off.

“We were very confident coming into this game because of how it went earlier, we knew that we were a more physical team than they’re used to facing, and one of our strengths is going inside, dominating the boards, we really felt comfortable with certain match ups we had on them.”

“It feels like it’s been a long year. Different team, a few new faces, bigger challenge than last year I’d say, but we still had talent and I think it took a while to put everything together, particularly in the middle of the season things didn’t go to well where we dropped a couple of games.

“But I think at the right time things came together, particularly defensively, as you can see today. We’ve been more consistent on defence and have enough talent on offence to take us through, I’m pleased because they have come together as a team.

And on the match-up with Lougborough, Middleton commented:

“Physically, it’s difficult for them. We have more size, more experience and that was the telling factor I think, particularly defensively I think they found it difficult at times, and I think that was the key. I think we’re a difficult match up for them and that showed today.”

Loughborough were hampered by the absence of Josh Ward-Hibbert, who suffered an injury previously in Newcastle and was shut down after 4 minutes. Levi Noel did his best to pick up the slack and led Loughborough with 12 points.

An altercation between Lee Goldsbrough and Jonas Dieterich during a loose ball play in the second half led to unsportsmanlike fouls for both players and a disqualification for Magic’s Stefan Gill after he was involved in the aftermath. That was as exciting as things got in a second half that never saw Loughborough in contention.