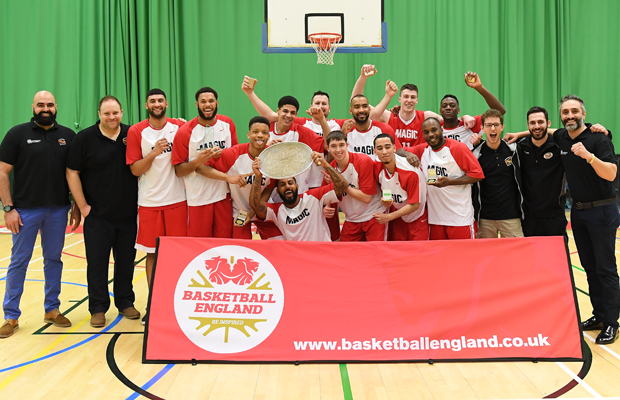 Duane Morgan picked up MVP honours with 19 points, 5 rebounds and 6 steals, as the game proved to be a non-contest with Manchester comfortable throughout.

Manchester took the lead for good with two minutes to play in the first period and never looked back, dominating the second period to take a 15 point lead into the halftime break. The second half the Magic kept pouring it on, cruising their way to a third straight National Trophy title.

“We’ve got a slightly different team to last year, I’m so pleased because they’re (Lituanica) such a tough team to play. They’ve got talent from the start of the team to the end, they fight like mad, I think we expected them to come out and hit us hard and we said we’ve got to hit them first and I thought we did that.

“And as strong a team as they are, I think we had control from the beginning I think that bodes well for the rest of the year just to give our guys some confidence, because we’ve had a couple of losses in the league.

“I knew we were capable of that (margin), they’re a ‘Jekyll and Hyde’ team really, they can be absolutely excellent and they can get some results like this. But O think we put them in that position today, I think we defended very well, they have a lot of threats but I think we did a good job with most of them, especially the perimeter guys, so that was very pleasing.”

Stefan Gill had 16 points and 8 assists for Magic, with Jack Minister scoring 14 on 5 of 7 shooting including some big threes.

Lituanica were led by 15 points from Mantas Guzys, whilst Mantas Adomaitis joined him in double figures with 10.