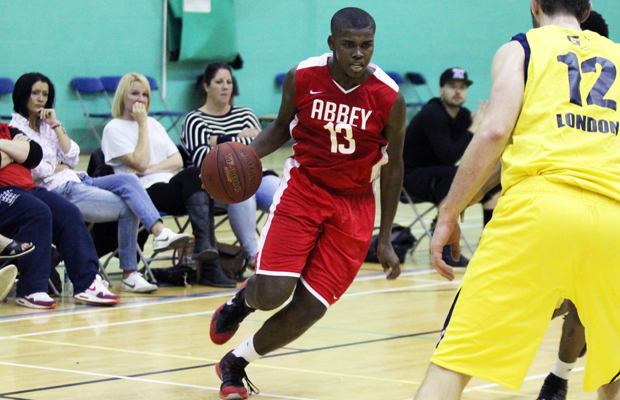 Check out the recap of the Elite Eight stage in the EABL as the playoffs got underway on Wednesday.

Barking Abbey booked their spot in the Final Four with a 97-71 win over Derby College/Noel Baker School on Wednesday afternoon at BA.

The short-handed Derby side put up a strong fight but ultimately were unable to overcome Barking Abbey’s depth and pressure down the stretch.

Adria Amabilino-Perez had an impressive outing for the visiting side, finishing up with a game-high 25, whilst knocking down five threes.

“We knew coming in Derby are a difficult team, they’ve got good players, are well coached, players getting real Division 1 experience, getting a lot of minutes and playing big roles.

“I thought we played with good energy, we wore them down a bit late and that helped us push the score out a little bit more. Overall I was pleased with most things we did, we’re going to have to play better as the competition gets tougher and tougher but it’s a good win for us in the first round of the playoffs.”

Charnwood College Riders advanced the EABL semi finals for the fourth straight year with a comfortable 95-46 win over JMA Rockets.

Sesan Russell scored 24 of his game high 26 points in the first half to lead Charnwood to victory over an injury-hit JMA team, going 9 of 12 from the field.

Charnwood Head Coach Josh Merrington was complimentary of the visitors:

“Credit to JMA, they had some serious injury trouble and their guys really battled despite clearly playing hurt. They have had a great season and were unfortunate to be hit with so many injuries at this time of year.

“I was happy with our execution on defence today. We struggled rebounding the ball early on but I think we got better as the game went on and were able to limit key players for JMA.”

Charnwood advance to take on Itchen College in their semi-final.

Itchen College moved into the EABL Final Four with a 68-47 win over a resilient Bournville side on Wednesday.

Adam Riabi would score 10 of his game high 22 points in the opening quarter as Itchen would lead by 12 points going into the second period. The game remained close until a 10-0 Itchen run in the third quarter to pull away, as Bournville were plagued by poor free throw shooting.

Bournville fought back in the fourth, but Itchen were able to keep their composure to pull out a 21 victory. EABL assist leader Sam Van Oostrum had 14 helpers in the win.

“I was very proud of our guys focus and toughness today playing against a gritty Bournville team,” Itchen Head Coach Matt Guymon said.

“A game like this earlier in the season would have seen us lose composure, so its great to see how far we have come.

“Keanen Williams and David Stevic are two of the best guards in the country and we focused in our scout on ways to limit them. To hold them to a combined 7 points, shows how locked in the guys were today and hopefully we can replicate that moving forwards.”

Itchen will face Charnwood in their semi-final.

Myerscough moved into the Final Four of the EABL playoffs following a 74-58 victory over City of London Academy on Wednesday afternoon.

Gedi Juozapaitis led CoLA’s attack with an efficient 20 points, James Mitchell was the only other CoLA player to have double digits with 11 but it was Myerscough who led from the beginning as they jumped out to a 10 – 3 lead.

“Defensively I thought we were excellent today, CoLA carry threats from multiple positions and have shot the ball well from the outside this year. We kept our concentration and were very mature in our performance”, said Myerscough Head Coach Neal Hopkins.

“This was a good starting point, we have shown glimpses of what we are capable of over the last few weeks but know we have to be more consistent as we move into the next round”.

Myerscough will now take on Barking Abbey in the semi-final as they attempt to make their third straight EABL final.