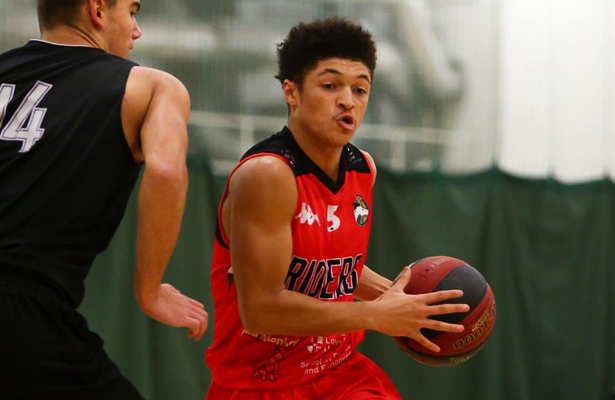 The 2016-17 EABL season reaches the playoffs – check out the preview of the Elite Eight matchups..

Barking Abbey became the only team this season to steamroll through the regular season undefeated, going 14-0 to finish as the number 1 seed in the East to match up with Derby College/Noel Baker School who slipped to fourth in the West with a 7-5 record.

Both teams are former winners of the competition and will be hoping to return to glory, Barking Abbey taking the inaugural ‘EABL’ title in 2014, whilst Derby took it in 2012 when the league was known as the Under-19 Premier Schools Competition.

Every team in the East has struggled to deal with Barking Abbey’s depth, with no opponent coming within single digits of them on the season and the squad has one of the best backcourts in the country with RJ Eytle-Rock (10.4ppg, 4.0rpg, 4.3apg, 2.7spg) and league scoring leader Amin Adamu (21.9ppg, 4.6rpg, 1.8apg, 2.7spg). BA are the best defensive team in the league, allowing less than 50 points per game and owing the best defensive rating.

“We are excited to be heading to the playoffs,” Barking Abbey Head Coach Lloyd Gardner commented.

“We know that we will have a tough match up with Derby. They are a program that has won this competition before, have a great coaching staff and a number of players that are getting real high-level experience and being called on to play serious roles in EBL Division One. We know that they will come prepared and so we will have to be ready if we want to continue with our unbeaten season.”

“We are excited to be in the playoffs again. A trip to Barking is obviously a really tough tie, but it’s March and we will be hoping to add our own bit of madness to this great basketball month.

“We’ve been playing some good basketball recently and we know if we play well we will have a good chance. We are waiting on a couple of guys who have been injured, hoping they might be fit for the trip to London. Barking’s strength in depth is remarkable, knowing who they might play is a little tricky as they have 17 guys who have played EABL this year.”

Defending champions Charnwood steamrolled through the West and were on their way to a perfect season until a final week upset at the hands of Myerscough to finish with an 11-1 record.

With the number 1 seed having already been locked up, Charnwood will take confidence into the playoffs, fielding one of the deepest rosters in the country and leading the league in almost every offensive category. They are led by three time Player of the Week Johde Campbell (16.5ppg, 4.6rpg, 4.4apg, 3.5spg), and Sesan Russell (16.4ppg, 5.6rpg, 3.4apg, 2.8spg) in the backcourt and league leading three pointer shooter Kyle Jimenez (48.8% 3PTFG) adding firepower. Henri Langton (10.2ppg, 4.2rpg), Morgan Carter (13.6ppg, 6.8rpg) and Romario Spence (9.3ppg, 7.8rpg) make up a formidable front court who will have their hands full with JMA.

There is no denying John Madejski Academy, making their playoff debut, have one of the most talented rosters in the league, despite their fourth placed seeding with an 8-6 record. With Ali Sbai (13.9ppg, 6.2rpg, 2.3spg), Ibu Jassey Demba (11.9ppg, 7.1rpg, 2.5apg, 2.4spg) and Fidel Gomez De Enterria Lopez (10.7ppg, 10.3rpg, 3.1apg, 2.1spg) they also have a front court to be envious of and Charnwood Head Coach Josh Merrington is all aware of the threat his side face.

“We are anticipating a very tough match up with JMA,” Merrington said.

“They have a strong team with a lot of older players and the majority of their team that finished runners up in the Under-18 National League last year have returned.

“They have, in my opinion, one of the best front courts in the EABL with Ali Sbai, Ibu Jassey and Fidel Gomez, as well as good back ups off the bench. Their coaching staff do an excellent job preparing them so we know we will have to play very well if we want to advance to the semi finals.”

“We are really happy to make it to the playoff stages of the EABL for the first time but naturally we want more!”

“We play a very good team in Charnwood in the quarter-finals and we know we will have to play a great game in order to win. They have done really well this season and Josh (Merrington, Charnwood Head Coach) has them playing some great basketball.

“We know we are going into the game with significant injuries and as the underdog but the group is really focused and hungry for more success so I am confident if we follow the game plan and maximise our potential on the day we have a great chance of causing an upset but it will be a difficult task, one however we are relishing!”

In a rematch of last year’s opening round playoff game, Bournville and Itchen will face off as teams who have improved as the season has gone and climbed the seedings in the final week of the regular season thanks to both having double wins.

Itchen have rounded out the regular season on an eight game winning streak to finish with a 10-4 record and sealing the number 2 spot with a win over City of London Academy on the final day of the year. As has become expected with any Itchen side, they are a well balanced squad with 5 players averaging over double digits, but have been led by new addition and league leader in assists, Sam Van Oostrum, this season (16.1ppg, 7.1rpg, 5.4apg, 2.9spg). Rael Williams (13.6ppg, 3.6rpg, 3.1apg) adds some punch in the backcourt, whilst Roman Farion has proved to be one of the best big men in the league this season (9.7ppg, 10.0rpg and 3.4bpg).

Meanwhile, Bournville went 5-1 over their final six games of the season to finish 7-5, and picking up the two final week wins they needed to sneak into the third spot. Bournville’s never say die attitude has seen them with multiple weapons that can hurt you, led by big man Meris Mazalovic (16.7ppg, 8.8rpg) in the front court, Xavier McIntosh (12.5ppg, 5.0rpg) and the all around games of Keanen Williams (9.1ppg, 5.1rpg, 4.5apg, 3.8spg).  and David Stevic (12.0ppg, 4.3rpg, 4.0apg, 1.8spg). They will be seeking revenge are being knocked out at the hands of Itchen last year.

“After having lost the first two games of the season, it’s a fantastic feeling to have just missed out on second place,” Bournville Head Coach Nigel Hanson said.

“We know Itchen are a fantastic team with a good tradition and a phenomenal coach. However, saying that, we are confident that we can go into any gym in the country and get a win on our day and hopefully that will be the case on Wednesday.”

“We always know that we are going to be in for a tough battle against Bournville as Nigel Hanson does a great job preparing his teams for these occasions.

“They are a very dangerous team with excellent guard play and one of the most efficient bigs in the country.

“I have been very pleased with how our guys have come together the last few weeks and I feel we have hit our stride at the right point in the season. We are looking forward to the challenge in what will no doubt be a fantastic advertisement for the EABL.”

2016 runners up Myerscough College head into the post-season with the second seed in the West, going 8-4, but with three of those losses being by two points or less.

“We are really looking forward to the match up with CoLA,” Myerscough Head Coach Neal Hopkins said.

“I’ve no doubt it will be an exciting fixture. CoLA have had another great season and carry multiple threats which we are well aware of. We have had a great few weeks of practice and the guys are determined to keep our season alive.”

CoLA, who finished 9-5, will be frustrated after losing the second spot in the East, having held it for the vast majority of the regular season and losing three of their final four games.

Regardless of their tough finish to the season, CoLA guard Gedi Juozapaitis is looking forward to the challenge:

“Coming off of a loss at home and losing out on getting home court advantage in the first round of the playoffs is tough,” he said.

“We know Myerscough are a good team and well coached. Traveling up there we have the odds placed against us. It’s not going to be an easy game, however we are coming ready with the aim of extending our season at least one game further.”

Catch up with all the regular season statistical leaders in the EABL here.