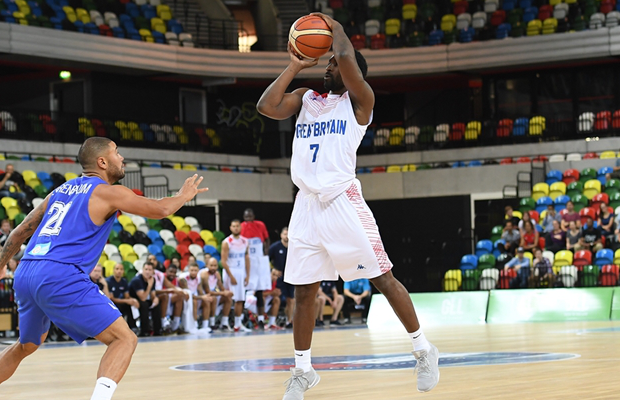 Ben Gordon finally made his long-awaited debut for GB’s Senior Men this summer and is enjoying the experience so much that he intends to be involved with the programme again, next year.

The former NBA guard is averaging 9.3 points, a team-high 6.3 rebounds as well as 5.0 assists per game in the EuroBasket 2017 qualifiers so far with GB second in Group G with a 2-1 record.

Gordon’s debut came against Germany (highlights here) in the second warm-up game of the summer, and the 33-year-old is enjoying the chance of playing at the Copper Box Arena, in London – where over half of his family still reside.

“It’s been a great surprise – I’m enjoying my time with my team-mates and coaches and I’m glad I made the commitment,” he told Hoopsfix.

“It’s been a lot of fun so far and a really good experience especially being able to be here [in London] playing in front of my friends and family.”


Gordon has received a lot of criticism in the past for not suiting up, with reasons ranging from injuries to fatherhood.

This summer, with no contract and recognising a strong showing could help his hopes of an NBA comeback, fans were finally able to see Gordon in a GB jersey.

“I didn’t have anything else to do,” Gordon responded when asked what has allowed him to represent GB this summer.

“In the past when I was going to come over for the Olympics, I had a knee issue and had to sit out for that.

“But this year, my schedule was free and I looked forward to the opportunity to come and play.”

Gordon has played in over 700 NBA games having made his debut for the Chicago Bulls 12 years ago after being chosen as the third overall pick in the 2004 NBA Draft.

The London-born guard had not played competitively for over a year prior to joining up with GB this summer, but believes he is beginning to find his rhythm.

“It’s still great to be out here and I’m getting back into the swing of things.”

Gordon revealed to ESPN UK earlier in the summer that playing for GB could act as a springboard for a return to the NBA, but has since attracted interest from European sides, according to reports.

And despite the rumours, Gordon insists his immediate focus is helping his team qualify for next summer’s EuroBasket before planning his next career move.

“Right now, the focus is to win the group with GB,” he said. “After that, I will explore my options of where to play next.”

GB’s qualification hopes remain in the balance at the halfway stage with the return fixtures still to be played. Three more wins – including a 20+ point success against Hungary – will be enough to secure passage to one of the four host nations at EuroBasket 2017.

When asked about his intentions to potentially play next summer for GB, Gordon revealed his commitment to the cause.

“I would definitely love to make that commitment from here on out,” he said.

“This is my first summer obviously, but I’d like to come back and finish the work if we are fortunate enough to make it [to EuroBasket] next summer.”

GB take on Hungary in their final home game, on Saturday, before trips to Macedonia and Luxembourg to conclude the qualifying campaign.

You can win free tickets to tomorrow’s game against Hungary with our competition here.