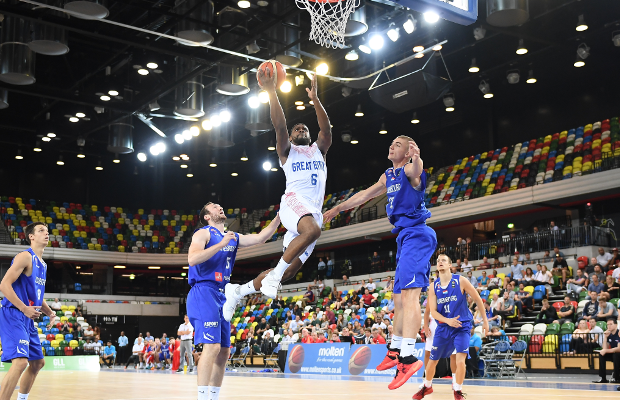 Great Britain’s Senior Men pulled away from Luxembourg en route to a 95-72 victory at the Copper Box Arena, on Wednesday evening.

Joe Prunty’s side improve to 2-1 in Group G ahead of a crunch game against Hungary on Saturday having eventually turned a two-point advantage at 56-54 into a comprehensive victory.

“Credit to Luxembourg, they did a good job on us in the first-half,” said Johnson.

“At half-time I feel like we made the right adjustments and came out and set the tone on defence, and we just built on that in the third and fourth quarters.”

He added, “Going forward we just want to start with that sense of urgency on defence and throughout the rest of these games.”


Gordon netted an early triple to continue the impressive shooting form from Saturday’s win against Macedonia. However, Luxembourg started brightly and had a lead at 12-9 at the midpoint.

GB began to start making shots with Gordon, Lawrence and Clark all netting from deep in a 13-2 run to take control. Olaseni used his size to assert himself in the paint and racked up eight points and four boards in the opening period.

Lawrence’s ‘and-1’ ended the first quarter with GB opening up a double-digit advantage at 29-19.

GB’s lead was cut in half early in the second as Luxembourg refused to roll over and caused problems.

Johnson’s triple sparked an 8-2 run, capped by another from Gordon, but the visitors would end the half with the final seven points to make it a two-point game, at 43-41 as Laurent had 21 of his game-high 30 points.

The game remained close during the early stages of the third and GB had a narrow 56-54 lead before beginning to break clear with the introduction of Will Saunders changing the dynamic with five points in an 11-2 run.

GB then finished the third with seven quickfire points to establish a 76-60 advantage ahead of the final quarter.

The lead extended beyond 20 points early in the fourth with GB in complete control. Eric Boateng produced a couple of crowd-pleasing blocks after Teddy Okereafor’s perfectly timed lob found Gareth Murray flying in for the dunk.

Boateng wrapped up the win in style with an emphatic dunk to end the game as GB rounded out 95-72 victors.

GB return to action on Saturday for their third and final home game against Hungary, at the Copper Box Arena, with a 6:30pm tip.