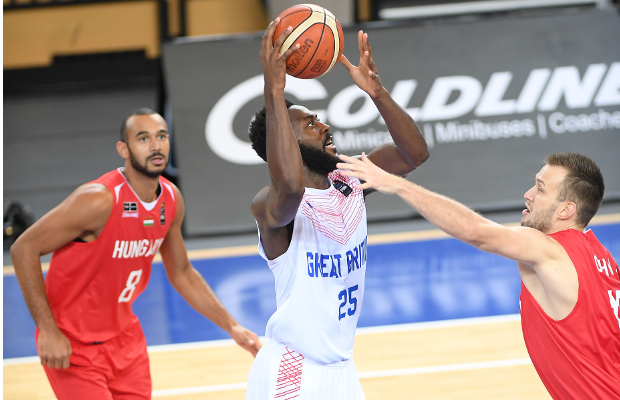 Great Britain’s Senior Men fell to their second defeat in the EuroBasket 2017 qualifiers after Hungary claimed an 88-80 success at the Copper Box Arena, on Saturday evening.

Joe Prunty’s side led by as many as 12 points in the third, but now drop to a 2-2 record after the visitors powered to their fourth victory in Group G.

Gabe Olaseni led GB with 17 points on 8-of-8 shooting whilst adding eight rebounds and there were three other players in double figures in the defeat. Ben Gordon was one of those with 11 points, though he struggled from the field – finishing up 4-of-17, while Kieron Achara netted all four of his attempts but only featured in 11 minutes on court.

Olaseni scored six points in a 12-2 start for GB with Alex Young and Dan Clark both netting from beyond the arc. GB were up 10 again at 16-6, but a 12-2 run saw Hungary level in

Gordon scored his first points early in the second, but Hungary would take their first lead at 31-30. GB responded with an 11-1 run capped by an Achara three and the home side would go into the locker rooms up 44-38.

Olaseni began to really assert himself in the third and scored nine points, helping GB lead by as many as 12 points at 50-38, in the process. However, Hungary stepped it up – as their unbeaten 3-0 record suggested they would and produced a timely 13-2 run that included three triples to help them into a 65-61 advantage

Another three dropped to put Hungary up seven, but GB responded with the next seven and would move back ahead as Clark netted a big three for 71-70. An untimely drought would ensue as the momentum swung.

Hungary scored 11 unanswered points in a pivotal spell to open up a commanding advantage inside the final two minutes.

GB shot below 30% from 3-point range, while their opponents made 11 in total and went 21-of-27 from the free throw line.

GB round out their qualification campaign with road trips to Macedonia and Luxembourg with the hope of finishing as one of the four best-ranked second placed teams.