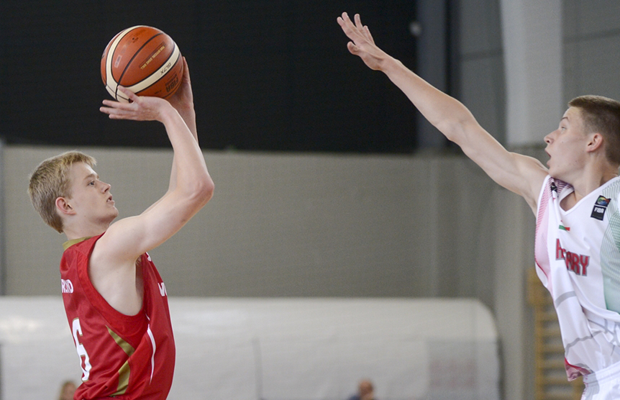 England Under-16s’ promotion hopes were dashed after an agonising 62-61 loss to Russia in the quarter-finals of the Division B European Championships in Sofia, Bulgaria, on Thursday afternoon.

Alan Keane’s side will now be playing for fifth place, after their comeback came short, battling back from as many as 15 points down.

With Russia taking a 3 point lead on a pair of free throws with 17 seconds left, England were unable to get a look at a three as Mate Okros layed it in to bring them within 1 before time expired.

Jacob Round led England with 21 points, Kareem Queeley had 20 on 9/14 shooting, while Daniel Ogoro added 9.

“Today we showed signs of nerves in the first half,” Keane said after the game.

“We came here with a goal to deliver the best we can in every moment with promotion to Div A as a result. A lack of rebounding presence really hurt us in the first half. We found our flow and imposed our style in the second half and played brave until the end. Better use of hands and position in defence led to stops which allowed us to attack Russia on the break led to a successful half.

“We may have won the second half by ten points but the damage caused in the first half proved to be the difference. We will now review the game and look for ways to be better and move on to preparation for the Czech Republic tomorrow.”

England will look to bounce back on Friday, when they face the Czech Republic at 11:45am.